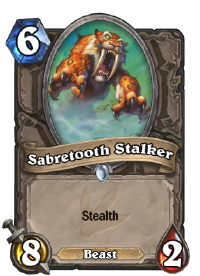 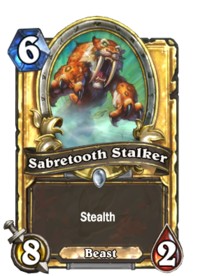 It's gotten a bit long in the tooth.

Sabretooth Stalker is a neutral common minion card, from the Journey to Un'Goro set.

Sabretooth Stalker can be obtained through Journey to Un'Goro card packs purchased online from the Battle.net shop, or through crafting.

With its high attack and low health, the intended strategy for this minion is clear: survive until the next turn (aided by its innate stealth), then make an impact - either by killing a high health minion, or by finishing off the opponent. However, its stealth does not protect this minion from AoE damage, and unless you have sufficient board presence even a single small taunt minion can prevent this minion from hitting its target.

Saber cats (or sabercats and sabers) are a special type of large fanged cat, similar to the (extinct) sabertooth cats of real world. They come in a variety of colors and have either spotted or striped coats, the striped type being the more common. Night elves carry a special affinity for sabers and use them as mounts, which are available for purchase in Darnassus.