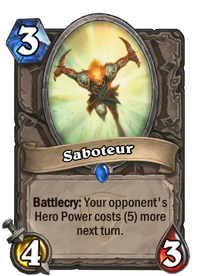 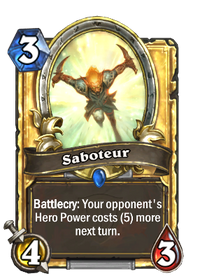 Listen all y'all it's a saboteur!

Saboteur is a rare neutral minion card, from the Grand Tournament set.

Saboteur can be obtained through The Grand Tournament card packs, or through crafting.

Saboteur is a useful card when playing against Inspire decks. Try to predict when your opponent will want to use their Hero Power and use it to make it harder for them to trigger any Inspire minions. In Arena, this card can be very strong at the right time against classes that use their Hero Power for board control, such as playing it along with a 1-Health minion against Mage and Druid, or against a board with a high-Health minion and a Northshire Cleric against Priest.

Saboteur is also useful against Shadowreaper Anduin by shutting down the Hero Power, Voidform for a turn, especially if the hero power costs 0 from Raza the Chained's Battlecry effect.

Summon
Shall we put a kink in their plans?
Attack
Hahaha! Sneak attack!

Saboteur is a term used in World of Warcraft for a variety of NPCs, often spies, demolitionists, and other technical specialists working against a specific target. Since the illustration is of a blood elf, this card may be based on the Sunhawk Saboteurs on Bloodmyst Isle, who worked to undermine the draenei settlement there. 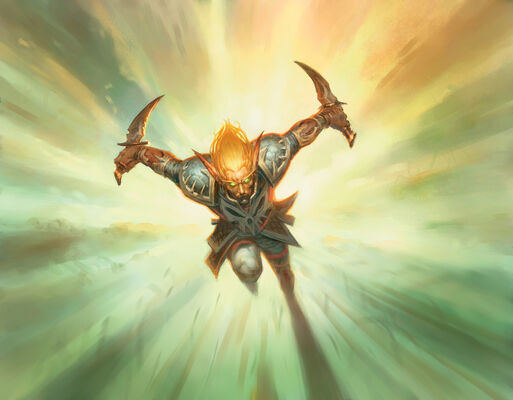