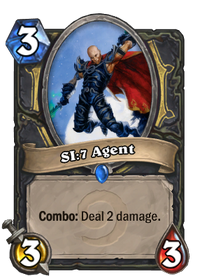 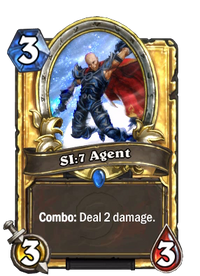 The agents of SI:7 are responsible for Stormwind's covert activities. Their duties include espionage, assassination, and throwing surprise birthday parties for the royal family.

SI:7 Agent is a rare rogue minion card, from the Classic set.

SI:7 Agent is a cheap minion with decent stats, but it truly shines when played for its Combo effect; 2 direct damage can weaken or finish off minions, or simply be the finishing blow against the enemy hero. In the early game the Agent can effectively trade for 2 or more enemy minions or be targeted by their removal, granting the rogue card advantage.

Low cost cards are essential in unlocking the Combo effect of the SI:7 Agent, such as The Coin, Backstab and Deadly Poison.

SI:7 (aka or part of Stormwind Intelligence) is an Alliance organization. It includes rogues specializing in special operations, assassination and stealth tactics. It is one of the most active organizations in the Alliance.

The guild is currently led by Master Mathias Shaw, grandson of Pathonia Shaw — the founder of a similar organization, the Stormwind Assassins, and a former master thief. SI:7 is located in the Old Town quarter of Stormwind. They have operatives all throughout the Eastern Kingdoms who carry out secret missions for Stormwind, such as Renzik "The Shiv" and Flint Shadowmore. They also have some operatives in the Kalimdor region, such as Andello Porter. 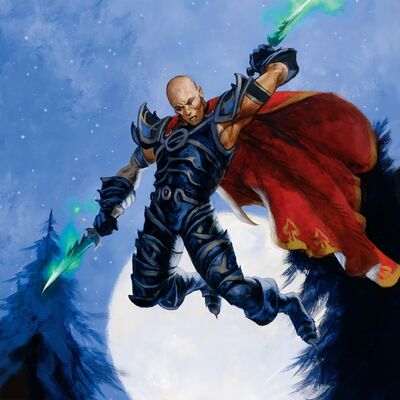