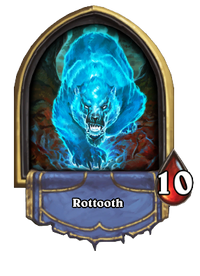 Incorporeal or not, those claws hurt!

Rottooth is a boss that can be encountered during the Monster Hunt.

Rottooth deals with a lot of taunt minions, as long as you keep dropping minions, you will eventually outplay him.

Give him no spells and weapons. Make sure you always have a minion on board to counter what he plays.

If you have cards like Sinister Strike in hand, you can push forward for face. Some of your minions have a deal damage effect, so you can play them and use their ability to bypass the bosses taunt minions.