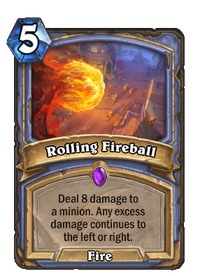 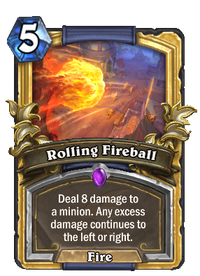 Deal 8 damage to a minion. Any excess damage continues to the left or right.

Why don't they ever run perpendicular?

Rolling Fireball is an epic mage spell card, from the Descent of Dragons set.

A flexible minion removal spell that can act as either a Flame Lance against a single large minion, or something akin to Meteor against several.

To ensure none of Rolling Fireball's damage is wasted, trade and use other spells first if possible so this spell's damage can continue through all possible targets.