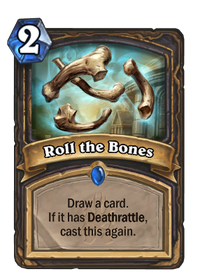 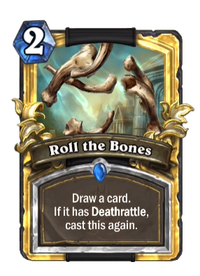 Draw a card. If it has Deathrattle, cast this again.

Call it: Heads or Tailbone…

Roll the Bones is a rare rogue spell card, from the Knights of the Frozen Throne set.

Roll the Bones can be obtained through Knights of the Frozen Throne card packs, or through crafting.

Roll the Bones is a form of random card draw that has high potential. It aims to be used in a Deathrattle deck to draw multiple cards, however it should be noted that these decks will contain many non-Deathrattle cards, which makes this card inconsistent even under the best circumstances, although if even two cards are drawn with it's effect, it still generates more value for the mana than the very popular Mage card Arcane Intellect.

In Arena, Roll the Bones is a weak card, as it's extremely unlikely to get enough Deathrattle minions to draw more than one card consistently.

In World of Warcraft, Roll the Bones is an Outlaw rogue finishing move which consume's the rogue's combo points to provide a random number of temporary combat buffs, chosen at random from a total of 6 possible buffs. The buffs last longer per combo point consumed.