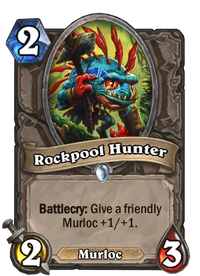 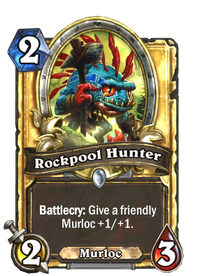 Battlecry: Give a friendly Murloc +1/+1.

Rockpool Hunter is a neutral common minion card, from the Journey to Un'Goro set.

Rockpool Hunter can be obtained through Journey to Un'Goro card packs, or through crafting.

This minion is a simple but effective Murloc buff card. It acts as a Shattered Sun Cleric at a 1 mana discount, but only targets Murlocs.

It is a very effective turn 2 play for a Murloc deck, allowing you to begin buffing your turn 1 play and achieve a very strongly statted board.

It is also very useful for improving the survivability of vulnerable yet important Murlocs, like Grimscale Oracle.

The Rockpool Tribe was a tribe of Murlocs that was based at Rockpool Village in the Blasted Lands. They lived alongside the Bloodwash Naga for years, with little trouble between the two. After the Shattering the Naga ransacked the Murloc village, killing their chieftain and enslaving or slaughtering the rest. Only one adult Murloc, Salt-Flop, escaped successfully, taking several tadpoles with him.[1]