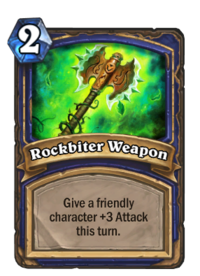 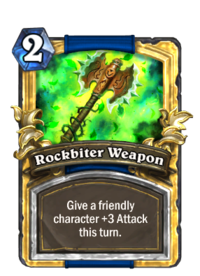 Give a friendly character +3 Attack this turn.

This would be real handy if your enemy is made of rock.

Rockbiter Weapon is a shaman spell card, from the Basic set.

Two copies of Rockbiter Weapon are automatically included in all players' collections upon unlocking the shaman class.

Two Golden copies of Rockbiter Weapon are a reward for raising a shaman to levels 36 and 38.

Rockbiter Weapon is uncraftable and cannot be crafted or disenchanted.

Rockbiter Weapon is a highly versatile card in the shaman's arsenal. Early on it can be used to remove enemy minions, preferably by targeting the shaman himself and preserving his own board control. It can also act as a sudden, potent boost in damage at any stage of the game. To maximize damage it is best used on a creature with Windfury, or even a shaman equipped with the Doomhammer.

In World of Warcraft, Rockbiter Weapon is a shaman ability that adds a 30% threat increase to a shaman's spells and attacks and provides a 5% decrease to all damage taken when a weapon is imbued with it.

The Axe of Cenarius is a two-handed, magical wooden axe crafted by Malfurion Stormrage, under the direction of the demigod Cenarius, during the War of the Ancients. It was made specifically for the orc Broxigar, and he described it as being like an extension of his own arm. Created using druidic magic, the axe was enchanted to have the sharpness and density of a diamond and would never break. It proved to be able to slice through any foe with ease.

Commentary: Rockbiter is the culprit of a few mass burst-damage combos in addition to being a reliable early game removal tool. Due to its strength in a variety of circumstances, it’s been one of the most widely played Shaman cards in Hearthstone’s history. Making changes to Basic cards that show up in every deck will help instigate more variety and help the Standard format succeed in the future. We’re preserving some of the synergistic potential of Rockbiter Weapon but decreasing its value as a removal tool by changing the cost of the card from 1 to 2 Mana.

We considered other Shaman cards like Tunnel Trogg and Totem Golem, but these are both leaving Standard relatively soon, so we thought it would be better to change Rockbiter and improve the Standard format in a more permanent way.