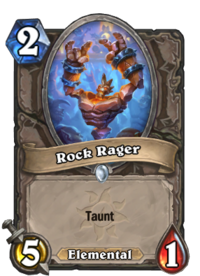 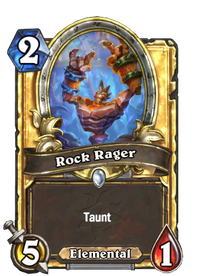 Rock Rager is a common neutral minion card, from the Madness at the Darkmoon Faire set.

Rock Rager can be obtained through Madness at the Darkmoon Faire card packs, through crafting, or as an Arena reward.

A fairly poor Taunt minion, especially for early in the game. High health is usually much more valuable than high attack, and the low curve of this card makes it likely for 1/1 minions to be around to clear it. Rock Rager is better off played later in the game facing higher-health minions, but even then is fairly poor compared to Strongman and Anubisath Defender as a cheap Taunt. It's also especially useless against Demon Hunter, Druid, Mage, and Rogue.