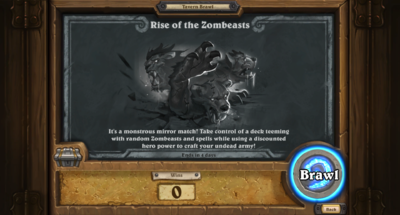 "It's a monstrous mirror match! Take control of a deck teeming with random Zombeasts and spells while using a discounted hero power to craft your undead army!"

The first reprise on September 25, 2019 lowered the starting health of each player to 20.

Because of the lowered starting health, the first player to get aggressive often wins. This means player one tends to have an advantage, but if it can't be capitalized on, player two has a huge opportunity to take back the game. Focus on crafting a cheap Zombeast to play on turn 1.

Always craft your Zombeast before playing a card (if you have the hand space). It's free to use and you never know what you'll craft until you make it.

Don't be afraid to end the turn with 10 cards. Random Zombeasts will almost certainly be worse than ones you can create with your hero power.