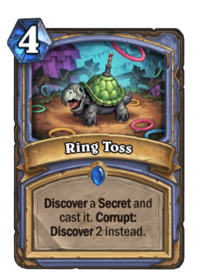 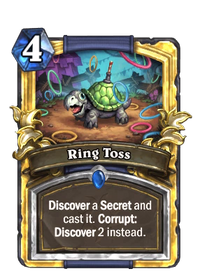 Discover a Secret and cast it. Corrupt: Discover 2 instead.

If you liked it, then you shoulda put a ring on it!

Ring Toss is a rare mage spell card, from the Madness at the Darkmoon Faire set. 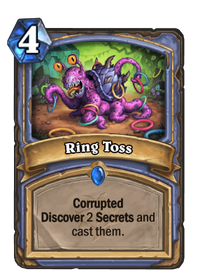 Ring Toss is a playable minigame and daily quest on Darkmoon Island in World of Warcraft. The turtle depicted in this card's art is Dubenko, "The Darkmoon Turtle".

Located next to the Southern Pavilion, this game provides guests with 10 rings in which to toss onto the pole attached to Dubenko, a turtle in a large circular pen. Dubenko moves a few yards from time to time, and the ring toss itself is not entirely precise. Jessica Rogers runs the game and provides the associated quest, Target: Turtle, which asks for 3 rings on the pole.