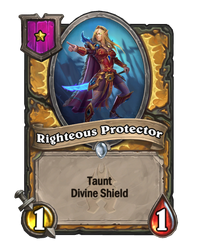 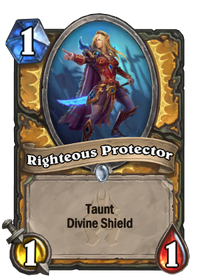 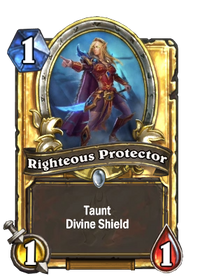 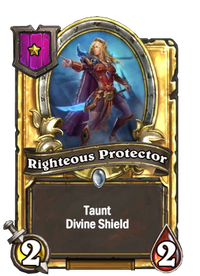 Righteous Protector is a Tier 1 minion in the Battlegrounds game mode.

While Righteous Protector has two strong keywords in Taunt and Divine Shield, which allows it to absorb two attacks and can protect key minions until stronger Taunts become available, this is otherwise a poor minion in the early rounds and only gets weaker from there since its lack of tribe synergy makes it hard to buff and fails to enable any strategies. Annoy-o-Tron is almost universally a better choice for its niche due to the Mech tag. Alleycat and Murloc Tidehunter make better early game minions as they can also take two attacks, but the tokens they summon means you get 1 more gold from selling those minions in later rounds.

In the end game if your opponent has Zapp Slywick, Righteous Protector can be teched to take both of Zapp Slywick's attacks away from your Mama Bear or Junkbot provided that the opponent is not Nefarian, although Annoy-o-Tron may still be preferable for this purpose. Tirion Fordring can buff this card to decent stat totals if picked up early, making it somewhat useful as a main tank for his warband.