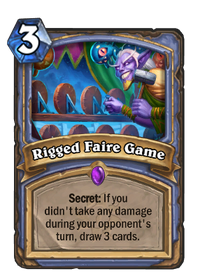 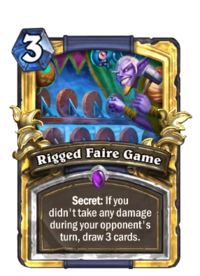 Secret: If you didn't take any damage during your opponent's turn, draw 3 cards.

Rigged Faire Game is an epic mage spell card, from the Madness at the Darkmoon Faire set.

Rigged Faire Game is best played while your opponent has no minions in play, almost ensuring that it's a delayed draw 3. You can also protect it with other Secrets like Vaporize or Counterspell. You can also protect yourself with the threat of Flame Ward, forcing your opponent to choose between letting you draw 3 cards or clearing their own board.

Be somewhat cautious when playing Rigged Faire Game. You need four empty hand spaces when your turn begins, or the large draw will burn cards.