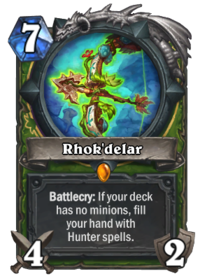 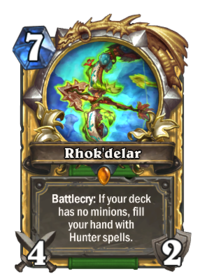 Battlecry: If your deck has no minions, fill your hand with Hunter spells.

Rhok'delar is a legendary hunter weapon card, from the Kobolds & Catacombs set.

Rhok'delar can be obtained through Kobolds & Catacombs card packs bought through the ingame Shop, purchased online from the Battle.net shop, or through crafting.

Rhok'delar is a card that requires building an entire deck around. While the idea of a minion-less deck sounds absurd, it can be made to work with plenty of token spells and weapons.

Spells that summon minions like Flanking Strike, Lesser Emerald Spellstone, Animal Companion, To My Side!, and Call of the Wild are essential so that you are not stuck with just removal spells. Lesser Emerald Spellstone is very important for this deck for its high-value minion generation, so Secrets will also be important in this deck. Wandering Monster and Rat Trap are good secrets for generating minions. Deathstalker Rexxar is also useful in this deck for generating minions.

When you do build a deck around this weapon, Rhok'delar's effect is very powerful, restocking the Hunter's hand with more spells. Since Hunters tend to struggle with card draw, this card compensates for this problem. When played on curve, be aware that you will mill one of your cards since there are no 0-Mana spells.

The Ancients of Felwood were regarded by the night elves as the most powerful of their kind. When the Burning Legion invaded Kalimdor the first time, they corrupted the land. Felwood, once a lush valley of trees and beasts, became a scar on the land and a reminder of the corrupting powers the Legion possesses. The Ancients, too, fell prey to the corruption and have been locked in a petrified state ever since-but their spirits still linger.

Hunters who return with the Ancient Petrified Leaf of Vartrus the Ancient will be given a task to seek revenge against the agents of the Burning Legion who hide in the four corners of the world. Once their heads are returned as proof, the Ancients will help the hunter construct a bow, "The likes of which has not been seen in 10,000 years." The ancients will also create an Ancient Sinew Wrapped Lamina, but downing the demons is not required for it.

Both Rhok'delar and its companion Lok'delar, Stave of the Ancient Keepers are living weapons. Rhok'delar is known to spontaneously sprout blossoms and Lok'delar glows with nature's aura, giving its owner innate resistances to poisons and nature-based spells.