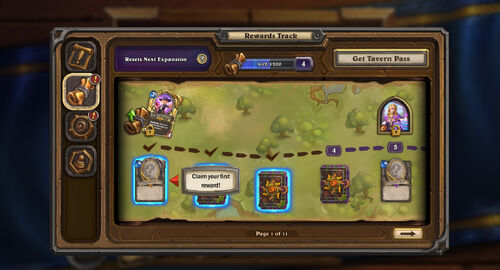 Rewards Track is the new Quest rewarding system introduced on Patch 19.0.0.65614 based on advancing to levels by gaining XP with Quests, Achievements and gameplay that will grant you Cards, Card Pack, Gold, Tavern Ticket and more. A grand total of 155200 experience points, which corresponds to approximately 500 hours of gameplay, is required to reach level 50 and complete the track, which unlocks access to bonus levels. Bonus levels (51 to 350) grant 50 gold each.

There are two different tracks on the reward track:

Rewards Track is inside the Journal.

On the top row it has a reset time and on the right you have a Tavern Pass button that directs you the purchase menu while in the middle you have your level and XP tracker.

On the main portion of the interface you have a scroll scenery style box that rotates as you change the page that also changes the scenery as you progress. It is split into two by a track line, the bottom portion is for all players and the top portion is for the Tavern Pass users.

The rewards themselves are visual and clickable that reveal a menu with the image, reward title and level.

Here are the rewards for each track.

*These card pack rewards are from the latest expansion.

** The expansions unique card back.

*** A chooseable hero skin for any class.
Total Rewards from the Free Track up to level 50:

The following portraits can be earned by reaching level 50. Only one portrait can be chosen each season. Each of the heroes are based on their class' respective Tier 1 armor set from World of Warcraft (or Tier 20 for Demon Hunter, due to them not having a Tier 1).

The following heroes can be earned at various points throughout the track from the Tavern Pass. Up to seven portraits can be earned this way per season, with six being alternate artworks for Classic heroes and the seventh being a new hero with custom voicelines and animations.

The following card backs can be earned.