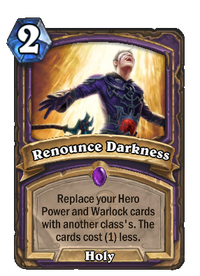 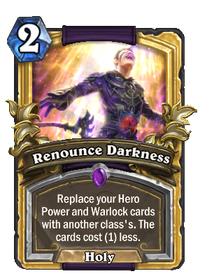 Replace your Hero Power and Warlock cards with another class's. The cards cost (1) less.

For the event version of this card, see Renounce Darkness (Event).

Renounce Darkness is an epic warlock spell card, from the Whispers of the Old Gods set.

Renounce Darkness can be obtained through Whispers of the Old Gods card packs, or through crafting.

The strategy to using such a gimmicky card like Renounce Darkness is to build around the gimmick. To do this, your deck should have a lot of Warlock Class Cards in it. Start by putting the mostly of the zoo warlock cards in and just in case you end up not drawing Renounce Darkness you will still have an okay deck. Once the deck is finished, you will want to try and mulligan for it removing all 3 mana or higher cards. If you end up getting it in the mulligan, DO NOT play it until you have a total of seven or more cards in your hand, including Renounce Darkness. This is because if you play it with 4 cards you will no longer have your hero power to keep drawing you cards and you will run out of steam fairly fast. After that it is all random from there and is not predictable.

This card appears to depict a human warlock renouncing the Darkness to follow the call of the Light. However, since the class switched to by the spell is random (and not limited to classes which worship the Light, namely the priest and paladin), this does not appear to be accurate. The light depicted may therefore simply be representative of a return from the Darkness, or may represent the Light turning the warlock away from their former path.

The spell is distinctly original to Hearthstone, as is the concept - warlocks are rarely (if ever) known to renounce the Darkness in favour of the Light, or any other path. 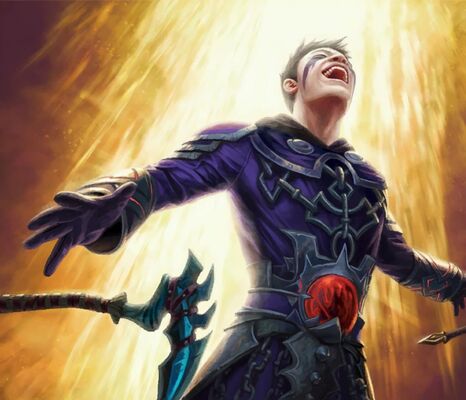 This means that cards added to your hand from your deck in a non-standard way, such as Tracking or King's Elekk, do not get the cost reduction.[6]
It also means that if you use Renounce Darkness as a non-Warlock and the spell chooses your current class, any of your own class cards which are subsequently drawn will be reduced in cost by 1.[7]