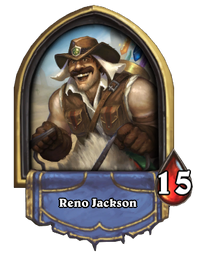 With a bag full of treasures
and a well-styled mustache,
Reno is ready to take
Tekahn down!

Reno Jackson is a hero that the player can pick in a Tombs of Terror run. He represents the dual class of Mage and Rogue.

He is available for free to all players. 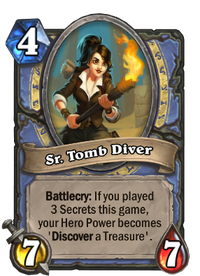 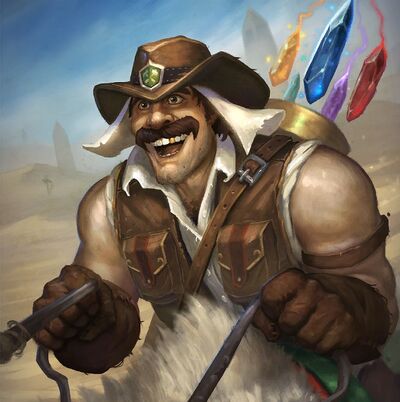 Sir Finley, hand me my whip!
This is my chance to stock up on treasures.

With a little practice I’ll be able to surprise them with some sweet new moves.

Time to choose my starting equipment. I'll scavenge more gear in the desert.

Ah! Bad guys! We’ll have to fight our way through, one nasty at a time.

Is it just me or are these guys getting tougher the farther we go?

Victory is mine! And so is this sweet, sweet loot. What should I take…?

I don't care what Elise says, I am TOTALLY taking this giant ring.

Ah-hah! A little inn! I can recruit some help here.

Run. RUN! Drop everything and run for it! We’ll have to start all over again.

Friendly Encounters
Whew. It's good to see a friendly face.
Here we go. I could use a cold drink!
Is that … a place to rest? I hope that's not a mirage!
Turn 1 on first boss in Chapter 1

Reno Jackson
This city was missing for generations… imagine the loot!
Brann Bronzebeard
Keep it together, Reno! We’re here for a reason.

Reno Jackson
Tomb raiding can be dangerous. Good thing I got my lucky murloc foot.
Sir Finley
Your lucky… what!?

Elise! This thing’s a GIANT! How can we hope to defeat it?

Here's a hot one, catch!

Chill out! I've always wanted to say that.

Think of this like a magical mage hat… of power!

Don't do anything I would do!

Lei! Lei! Check out this sweet magic spell! Lei? Are you ignoring me?

Unimaginable power! And I get to shoot it at the bad guys!

And they said wishing for more wishes would never work!