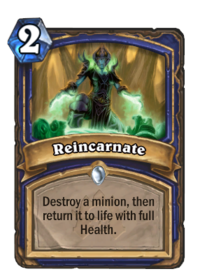 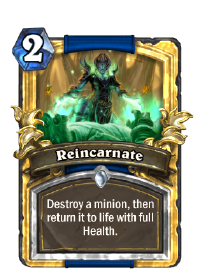 Destroy a minion, then return it to life with full Health.

It's like birth, except you're an adult and you were just dead a second ago.

Reincarnate is a common shaman spell card, from the Naxxramas set.

Two copies of regular Reincarnate are obtained by completing the shaman Class Challenge in Curse of Naxxramas.

As a Wild format card, both regular and golden versions of Reincarnate can also be crafted for the following amounts:

This destroy effect is clearly intended to interact with Deathrattles, allowing the player to activate a minion's Deathrattle prior to its death, and twice in total.

Other synergies include minion death-related effects, such as Flesheating Ghoul.

The card could also be useful simply for restoring a damaged minion to full Health, as well as restoring any Divine Shield the minion originally came with. Another use is to give a minion with Charge the chance to attack again that turn. Non-Charge minions should attack before being Reincarnated, as they will be exhausted when they are re-summoned.

It can also be used as a buff-removal spell, acting as a pseudo-Silence against any effects that aren't native to a card. Cards that have been given additional stats, Taunt, or other beneficial abilities with other cards/effects can be stripped down to factory settings, allowing many threats to be dealt with or bypassed entirely. Of particular note is that, unlike a Silence effect, using Reincarnate is effective on an Ancient Watcher that has been Silenced or buffed with Taunt, as it puts back the Cannot Attack ability and removes the Taunt simultaneously.

Similarly, it can be used to remove debuffs such as Equality, Hunter's Mark, or the effects of an Aldor Peacekeeper.

It is also useful to use Reincarnate on opponent's minions with negative Deathrattles (e.g. Bomb Squad or Rattling Rascal), causing them to endure them twice.

As noted above, Reincarnate has excellent synergy with Ancestral Spirit, allowing the shaman to duplicate a chosen minion. The combination is even more effective if the minion has already attacked, taken damage and/or suffered Silences or debuffs. This also works very well with Charge minions.

One such play is to summon Leeroy Jenkins, attack once, then cast Ancestral Spirit followed by Reincarnate, summoning two fresh Leeroys, and then attack with both of them. This will result in a total of 18 damage for 9 mana, often enough to win the match. Rockbiter Weapon or Lightning Bolt can be used to add further burst to the combo.

Note that if using Reincarnate on a Charge minion in order to deal damage to the enemy hero, it is equivalent to Windfury, but without the lasting benefits.

If Reincarnate is used on Kel'Thuzad, the new minion will revive the original, resulting in 2 copies of Kel'Thuzad on the field. While expensive, this lategame combo is a devastating way to secure board control. 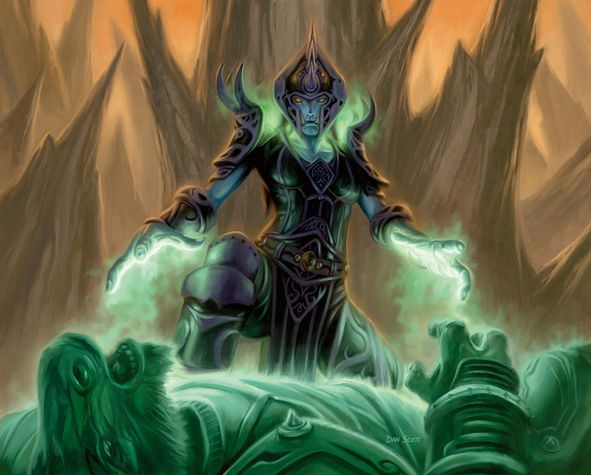