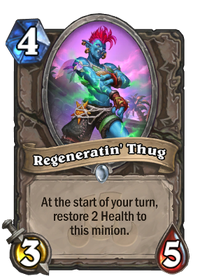 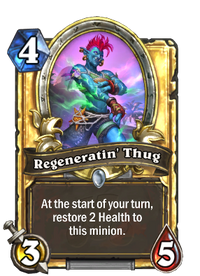 At the start of your turn, restore 2 Health to this minion.

Regenerates any injury except heartbreak.

Regeneratin' Thug is a common neutral minion card, from the Rastakhan's Rumble set.

Regeneratin' Thug can be obtained through Rastakhan's Rumble card packs, or through crafting.

Regeneratin' Thug is a decently-statted minion which rewards players for trading down into smaller minions, as the damage to this minion will be recovered after one turn. Be warned, however, that as a start of turn effect, your opponent has a chance to kill this minion off before it can recover.

Priest players can take additional advantage of this effect, as they have numerous heal-centric cards such as Northshire Cleric and Nightscale Matriarch.

All trolls are known for their powerful regenerative abilities, a trait that this particular thug appears to be taking advantage of.