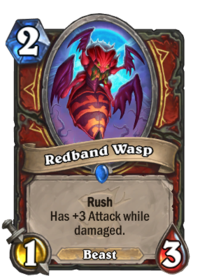 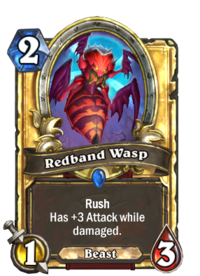 Rush
Has +3 Attack while damaged.

Also comes in other colors, but red's in fashion this season.

Redband Wasp is a rare warrior minion card, from the The Witchwood set.

Redband Wasp can be obtained through The Witchwood card packs, or through crafting.

Redband Wasp, like most Rush cards, can effectively deal with early minions on its own. Since it has a poor one attack, it can't trade very efficiently on its own, but can be devastating when damaged and/or with Woodcutter's Axe, clearing out a small minion and leaving a high-Attack threat on the board.

Wasps are an arthropod type found on Azeroth, and other places. They are stinging insects. Wasp species of various sizes can be summoned by certain arcane casters to attack their enemies. A wide variety of silithid wasps are found on Azeroth all over Kalimdor.