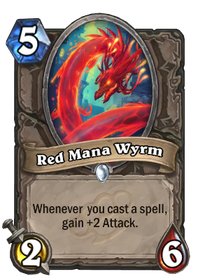 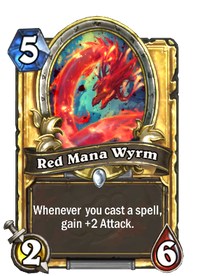 Whenever you cast a spell, gain +2 Attack.

It has double the Attack. "Go on." And double the Health. "Yes??" And its trigger has twice the effect. "WHAT???" And it costs… Five times more.

Red Mana Wyrm is a common neutral minion card, from the Mean Streets of Gadgetzan set.

Red Mana Wyrm can be obtained through Mean Streets of Gadgetzan card packs, or through crafting.

This is a bigger Mana Wyrm, but available to all classes. Any class with a lot of spells (preferably low-cost) can make use of the Red Mana Wyrm. Rogues in particular have access to cheap spells and Stealth-granting effects in Conceal and Master of Disguise, which can allow for a devastatingly strong Red Mana Wyrm to act as a finisher.

This appears to be a Mana Wyrm that has fed on the Kabal's corrupted red mana, causing it to grow in size as well as power.