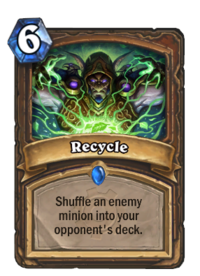 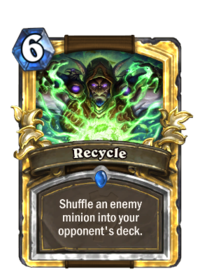 Shuffle an enemy minion into your opponent's deck.

Druidic recycling involves putting plastics in one bin and enemy minions in another bin.

Recycle is a rare druid spell card, from the Goblins vs Gnomes set.

Recycle can be obtained through Goblins vs Gnomes card packs bought through the ingame Shop, purchased online from the Battle.net shop, or through crafting.

Recycle can be useful for removing minions from the board without triggering their Deathrattles. The downside is that the minion is only placed back into the opponent's deck, and so may return later on.

This can be useful for removing Taunts from the board, allowing the player to attack the opponent directly, potentially winning the game. It can also be useful in delicate situations such as when destroying an enemy Abomination would result in the death of the player's own minions.

Note that since most games conclude before the player's deck is exhausted, the player may or may not re-draw the Recycled minion that match. Even if they eventually do, Recycle can be useful for buying time, or temporary board advantage to either establish a strong position, or finish the opponent.

Playing Recycle on minions with powerful Battlecries may be unwise, as this will allow the player to make use of them again, but the same way it would be wise to recycle minion with negative battlecry, such as Pit Lord or Doomguard. Forcing an opponent to play minion with negative battlecry, especially with discard effect, is often frustating or even devastating for opponent.

Recycle is particularly troublesome for the opponent when played upon an expensive minion such as Ysera, forcing them to pay the card's full mana cost if they wish to summon them again.

Recycle is especially well-suited to removing Malorne from the board, since destroying Malorne without first silencing him will result in him being shuffled back into the player's deck anyway. 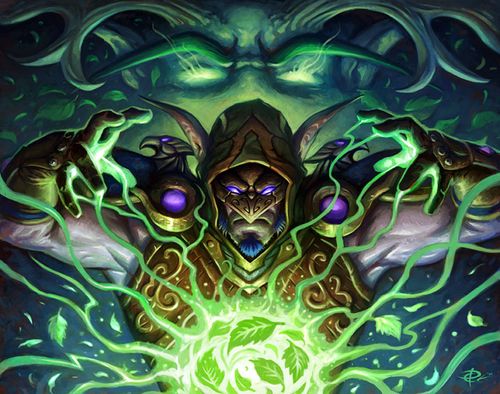