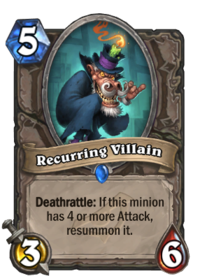 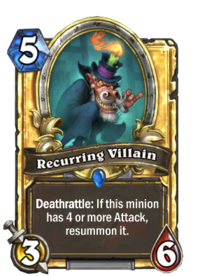 Deathrattle: If this minion has 4 or more Attack, resummon it.

Recurring Villain is a rare neutral minion card, from the Rise of Shadows set.

This card is similar to Zerek, Master Cloner, but Neutral and requires less maintenance to keep his effect up, since there are many more ways to buff its Attack.

It works best in a Paladin deck, thanks to their access to numerous cheap buff spells. Works particularly well with Sword of Justice, giving it as many lives as you have Durability on the weapon.

In Wild, you can combine this with Sneaky Devil to make it unkillable - as long as the opponent has no way to kill the Sneaky Devil.

Summon
Me have master plan. You no stop me.
Effect triggering
Hihiha!
Attack
I'll get you!