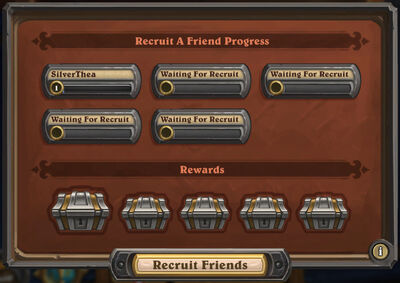 The Recruit A Friend interface

Recruit A Friend is a system for recruiting players to start playing Hearthstone, with in-game rewards for both the recruiter and recruits.

The Recruit A Friend system offers rewards in the form of Classic card packs for both players, and the alternate hero Morgl the Oracle for recruiters. All rewards are region-specific and cannot be transferred.

How to recruit[edit | edit source]

The Recruit A Friend icon

To recruit a player, the recruiter has to share a recruitment link, which other players can click on to register as a recruit. The link can be obtained in two ways: from the official site, or via the in-game interface.

The link can be obtained online from the official Recruit A Friend page. On the page you will find a recruitment link unique to your account and the region corresponding to the page's URL. For example, if the URL starts with http://eu.battle.net the link generated will be for the Europe region. However, a drop-down list beneath the URL can be used to manually select a different region. Various options for sharing the link are provided.

Alternatively, the link can be found in-game through the Recruit A Friend button, found in the bottom right corner of the friends interface. Clicking the button in the interface will copy the link into the computer's clipboard, allowing it to be pasted elsewhere. In this case the link provided will match the region you are currently logged into.

When a friend clicks on your link, they will be taken to a special web page where they can log in, download the game client (if necessary), and register as a potential recruit. Once they log in they will be added as one of your recruits, and immediately be awarded a Classic card pack. Once they reach a combined 20 levels, you will be granted the appropriate rewards. 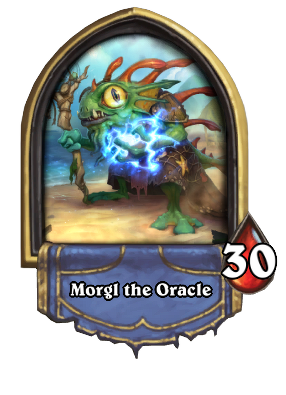 Recruits gain rewards as soon as they log in as a recruit. Each player can only earn this reward once.