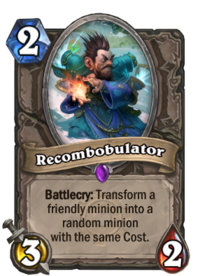 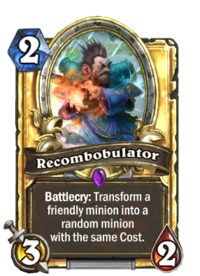 Battlecry: Transform a friendly minion into a random minion with the same Cost.

For when you didn’t combobulate quite right the first time around.

Recombobulator is an epic neutral minion card, from the Goblins vs Gnomes set.

Recombobulator can be obtained through Goblins vs Gnomes card packs, or through crafting.

Example: Minions with a "unique" mana cost (such as the 20-Cost Molten Giant) will always transform into another copy of the same minion: this can still be useful for restoring the minion to its base condition and full Health, similar to replaying it from the hand.

Example: A Summoning Portal might cause a Doomguard to cost only 3 mana, but Recombobulator will still transform it into a random 5 mana minion.[4]

The Recombobulator is especially effective when used on targets which have powerful Battlecries or Choose One effects, but weaker than average stats and/or other abilities. Transforming them can allow the player to make the most of the minion's Battlecry before swapping it for a more useful ongoing minion. For example a player might summon a 5/6 Guardian of Kings, benefit from its healing, then transform it into a 7/5 Ravenholdt Assassin, or even a 5/7 Archmage Antonidas. Other examples of good targets include Cabal Shadow Priest, Antique Healbot, Ancient of Lore and Blingtron 3000.

Recombobulator is also very effective for removing silences and undesirable buffs. For example, it can be used to convert a minion affected by Corruption or Power Overwhelming before it is destroyed.

If used on a minion temporarily stolen with Shadow Madness, the player will gain permanent control of the replacement minion. This works due to the buff that makes Shadow Madness work, which is lost when the minion is transformed.

While the recomboulation of minions is generally unpredictable, those with very rare mana costs provide more predictable results. Most notably, since Molten Giant is the only 20 cost minion in the game, the player is guaranteed to recombobulate it into a fresh Molten Giant, effectively serving as a full heal (as well as removing enchantments). Similarly, Clockwork Giant and Mountain Giant are the only 12 cost minions, guaranteeing a fresh 8/8 body. Slightly less predictably, converting a Force-Tank MAX or Ironbark Protector has a very good chance of netting you a late-game legendary minion such as Tirion Fordring or Gruul.

Attack
Time for a change.

This minion seems to combine magical transformation with the gnomish liability for unpredictable results. The Recombobulator is original to Hearthstone, both in title and in its ability to transform targets into powerful creatures such as Molten Giants, or even unique individuals such as Deathwing, as opposed to the usual Chickens or Sheep. 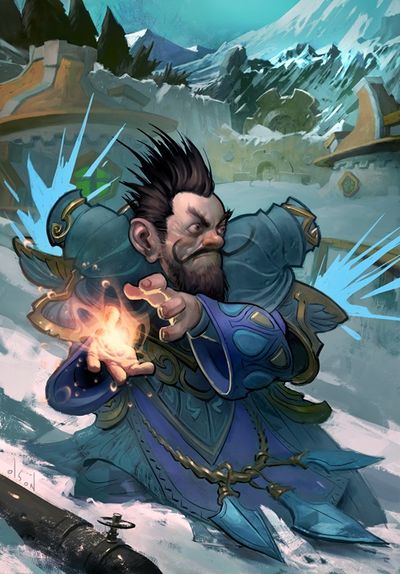