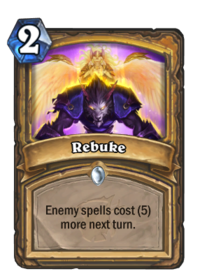 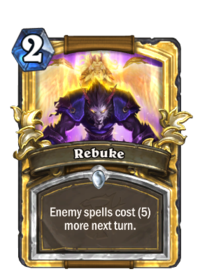 When one buke just isn’t enough.

Rebuke is a common paladin spell card, from the The Witchwood set.

Same card effect as Loatheb . Making enemy spells cost 5 more makes your opponent have a hard time casting their spells and effectively shut down spells that cost 6 or more making them unusable.

Rebuke is a level 35 paladin spell which allows the paladin to interrupt an enemy's spellcasting and prevent any spell in that school from being cast again for 4 seconds.