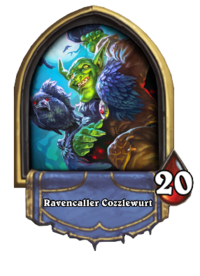 The feathered fiends of Gilneas flock to his sinister call.

Ravencaller Cozzlewurt is a boss that can be encountered during the Monster Hunt. 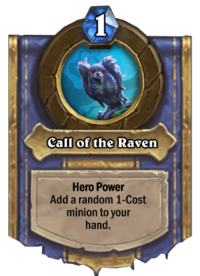 Ravencaller Cozzlewurt
Bird is the word!
Fly, be free!
Sometimes I wish I were a bird.
Who's a pretty bird?

Ravencaller Cozzlewurt
Ehh... close enough.
I... didn't mean to call that one.

Killing one of Cozzlewurt's birds

Ravencaller Cozzlewurt
What did they ever do to you?!
Why!? They're just birds!
You... you monster!

Ravencaller Cozzlewurt
That's a nice one.
This fight is for the birds!

Keep your cannon ready for any low health minions he throws at you.

You can simply deal with his birds by using your hero power.

Fill your board while using spells to kill his minions.

Since his spells are small, you may simply focus on board control.