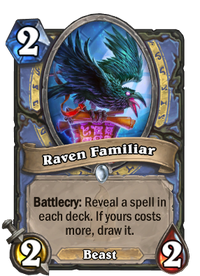 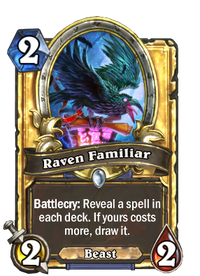 Battlecry: Reveal a spell in each deck. If yours costs more, draw it.

Quoth the raven, 'Does yours cost more?'

Raven Familiar is a common mage minion card, from the Kobolds & Catacombs set.

Raven Familiar can be obtained through Kobolds & Catacombs card packs, or through crafting.

Despite slightly below-average stats for a 2-mana minion, Raven Familiar's battlecry boasts a significant advantage. While the card draw generates card advantage and thins the deck for increased consistency, if played on curve in the early game it provides a 2/2 body that can trade into other 2-drops, but if played in late game it has a higher chance of drawing you a vital spell, which can possibly be played in the same turn.

Due to the joust requirements, Raven Familiar is best suited for decks built around expensive spells and synergy with minions, such as Medivh, the Guardian and Dragoncaller Alanna.