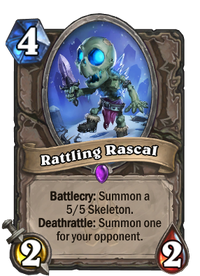 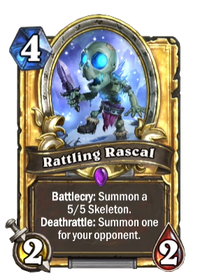 Don't give up, skeleton!

Rattling Rascal is an epic neutral minion card, from the Knights of the Frozen Throne set.

Rattling Rascal can be obtained through Knights of the Frozen Throne card packs, or through crafting. 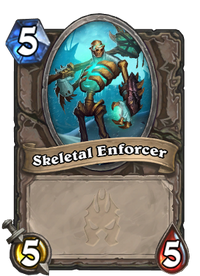 This minion gives 7/7 stats for 4 Mana, but once the 2/2 is destroyed, it summons a 5/5 for you opponent, effectively cancelling out its benefit. This drawback won't be as much of a problem if you have removal prepared for it, however.

Like any negative Deathrattle minion with low stats, it is a great candidate for silence effects and Evolve-like transformation effects. Warlocks can also use Treachery on this trade the 2/2 for another 5/5.