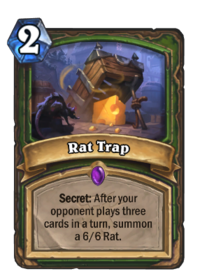 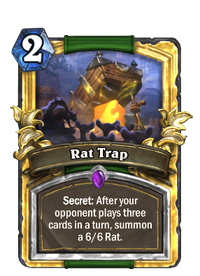 Secret: After your opponent plays three cards in a turn, summon a 6/6 Rat.

Rat Trap is an epic hunter spell card, from the The Witchwood set.

Rat Trap can be obtained through The Witchwood card packs, or through crafting. 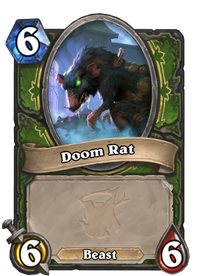 Rat Trap provides excellent stats for its cost, but has a hefty trigger condition. Rat Trap will often not trigger until multiple turns after its been played, or may never trigger at all. This makes Rat Trap an ideal "filler secret" that can be thrown down at any time, benefiting Secretkeeper or Lesser Emerald Spellstone, and its difficult activation condition makes it useful for triggering Secret-dependent cards like Hyena Alpha, Sunreaver Spy, and Masked Contender. Due to Rat Trap's unique trigger requirement, your opponent may quickly suspect which trap it is. This can be an upside by effectively restricting your opponent to two cards per turn, which can keep aggro decks in check.

One of the major upsides is that your opponent likely won't have an answer to a sudden 6/6 after playing three cards. This gives you a strong body that can attack immediately.

Rat Trap is strongest against combo decks, which are the most likely to play multiple cards in one turn, usually while attempting to cycle through their deck. Note that while their combos will likely set off Rat Trap, that combo will probably also end the game before you can attack with the Doom Rat.

Millhouse Manastorm is a great way to bait your opponent into playing their spells, possibly triggering Rat Trap faster. However, the potential advantage your opponent can gain from a turn of free spells can easily outweigh the extra 6/6 token (especially if they have removal ready), making such a play dubious at best.