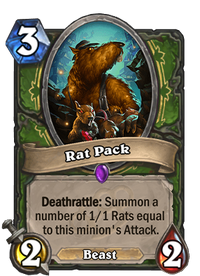 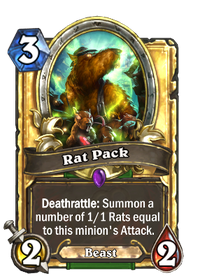 Deathrattle: Summon a
number of 1/1 Rats equal
to this minion's Attack.

Rat Pack is a Tier 3 minion in the Battlegrounds game mode.

Rat Pack is a keystone minion for most Beast strategies, capable of spawning large numbers of tokens to be buffed by Mama Bear and feed Scavenging Hyena. With these synergies, a buffed Rat Pack can often deal much more damage than its raw stats suggest.

Unlike most Deathrattle minions, Rat Pack should not be given Taunt. In order to maximize the value of its Deathrattle, Rat Pack should ideally die after most of your other minions have died so that it summons as many tokens as possible. As such, Rat Pack should generally be placed near the right of your board, but to the left of Scavenging Hyena, Pack Leader, and Mama Bear.