The two Ranked ladders each consist of five leagues (Bronze, Silver, Gold, Platinum, and Diamond), with a top-most Legend rank above these leagues. Each league is made up of 10 ranks, and players climb through these ranks by winning matches and gaining stars. Different from these two Ranked ladders, new players to Hearthstone play in a special beginner's ladder called the Apprentice League in which there are 40 ranks.

New players to Hearthstone start in the Apprentice League, which contains 40 ranks, from Apprentice 40 to Apprentice 1. These ranks are exclusive to new players only, and players cannot lose stars in these ranks.

Many rewards are given to players for climbing the Apprentice League. Players earn 3 Classic card packs upon reaching rank milestones at Apprentice 35, 30, 25, 20, 15, 10 and 5. Upon advancing out of Apprentice 1 and the entire Apprentice League, the player earns 2 Classic packs and 2 packs each for the most recent four Hearthstone expansions. The player will then be promoted to Bronze 10, gaining access to the normal player ranks and the ability to play with Wild cards. 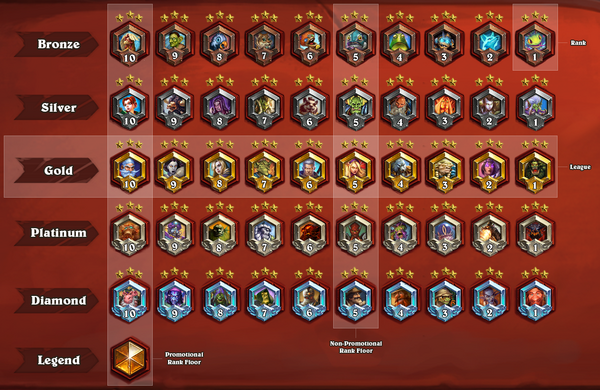 Players advancing out of Diamond 1 of the normal player ranks will be inducted into the prestigious Legend rank.

Players at Legend rank have their rank displayed as a yellow number on top of an orange gem. For example, if a player's gem displays the number 275, that player is ranked the 275th best Ranked player in their region. For a live leaderboard of Legend players, please visit the official Legend player leaderboards for both Standard and Wild in the Americas, Europe, and Asia-Pacific regions.

With the new Ranked mode overhaul in April 2020 alongside the 2019-2020 coronavirus pandemic, a record-breaking number of players achieved Legend rank in China, reaching as high as 100,000 Legend players in Standard.[1][2]

Winning matches earns players stars, and stars are needed to advance ranks. Each rank contains three "star slots", so only three stars are needed to advance out of each rank. The number of stars awarded for winning each match is determined by a Star Bonus, which is given at the start of each season, and also by a winning streak bonus. Players are awarded a Star Bonus based on both the player's MMR and numbered rank in the previous season.[3][4] This Star Bonus is a multiplier on the number of stars a player earns from each match win.

Every player starts with at least 2 Star Bonus at the beginning of a season. Also, if a player misses playing for multiple seasons, the player will not lose much of their Star Bonus.[5] The following is a table of the minimum Star Bonus a player can start with at the start of a season, provided the player's best rank performance in the last season:[5]

In Ranked, losing games causes players to lose a star, unless they are at a rank floor. At a rank floor, a player can never fall below that rank for the remainder of the season. Rank floors occur at every 5 ranks in the ladder, for example at "Bronze 5" or "Gold 10". Upon climbing and hitting each ranked floor, a player's Star Bonus will decrease by 1, meaning that as a player climbs up in ranks, it will become more challenging for the player to climb up to higher ranks.[9]

There is also a winning streak feature that doubles the amount of stars earned from a win if the player also won their previous two ranked matches. This winning streak multiplier, however, is not given to players at or above Diamond 5.[5] Games do not need to be played in the same session to be qualified as a winning streak, but winning streaks do get reset with each season.[10]

When playing with a Star Bonus greater than one, players are matched by a hidden Ranked matchmaking rating (MMR). This means that all players playing with a Star Bonus will always be matched against players who are close in skill level to them, until the player climbs to a rank which causes the player to run out of Star Bonus.[11] Once a player runs out of Star Bonus, they will start matching with opponents by rank and not by MMR.[5] The matchmaking system, however, can accept looser matches if necessary in order to ensure players are not left queueing for too long.

Players at Legend rank are matched according to the same hidden Ranked MMR.[12] MMR is in fact tracked during all Ranked Play activity, and it is used whenever matchmaking involves at least one Legend rank player.[5][13][14] MMR also determines the player's initial numbered seeding upon reaching Legend rank.[14] While the system aims to limit "Legend vs sub-Legend" matchings as much as possible, Legend rank players are sometimes inevitably matched against sub-Legend players due to compromising calculations in MMR matchmaking.[15]

MMR calculations in Hearthstone are highly specific to the game. They are complex and do account for different amounts of playtime over time, among many other factors.[16]

Matchmaking rating is not reset at the end of every season.[5][17]

For more information about matchmaking in Ranked mode, please check out the official Ranked matchmaking FAQ. 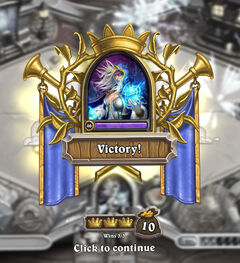 Note that the single-card rewards obey the duplicate protection rule afforded to opening card packs, meaning that players are much more likely to get cards which they have not yet acquired.[19]

Each season brings with it a unique card back which players can collect by winning 5 games in Ranked play.[9] These card backs are designed to be available to all players. After each ranked game prior to the 5th victory, players are reminded of how many wins they still need to earn the Season card back with an animation on the victory screen. Progress can also be checked by visiting the Quest Log.

First-time rewards are awarded to players who reach a ranked floor for the first time in Ranked mode. These ranked floors occur at every 5 ranks in the league system. The rewards earned by reaching such ranks consist of cards and card packs from the Classic set, aimed to help new players get started with deck building.[9] The single-card rewards also obey the duplicate protection rule afforded to opening card packs, meaning that if not all cards of that rarity have been acquired yet in the Classic set, the single-card reward will be a Classic card that the player does not own.[20] The following is a table of the rewards earned by reaching each rank:

With the 15.0 patch update on October 8th, 2019, whenever a player completes another 500 wins for a total of 1000 wins with a given hero in Ranked play or Arena mode, the player's hero can be replaced with a special golden 1000-Win hero skin.