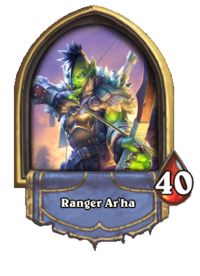 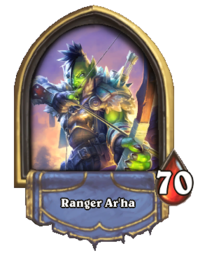 Battlecry havoc, and let slip the Alleycats of war!

Ranger Ar'ha is a boss that can be encountered in The Dalaran Heist.

These decks correspond only to levels 6-7. If this boss is encountered on level 5, her deck will be missing 5 random cards.

Ar'ha has plenty of Battlecry cards and her hero power makes these cards powerful. It is best to keep the pressure on and take control of the board quickly.

Ranger Ar'ha
Intruders in the city! I'll handle this!
Down boy! (vs. Ol' Barkeye)

Ranger Ar'ha
Ahem.
Can priests cure sore throats?
I wonder if Bae Chao will ever let me back into the library...

Been waiting for this!
Gotta save up for a big shout!
YAAAAAA!
Of player
Hah, so feeble.
Try harder.
Was that supposed to impress me?

Brann! Back for a shouting match?

You need a little toy like that for nice big shout? Pah!

How is this possible?!

Ranger Ar'ha
Not on my watch.

Ranger Ar'ha is unique to Hearthstone.