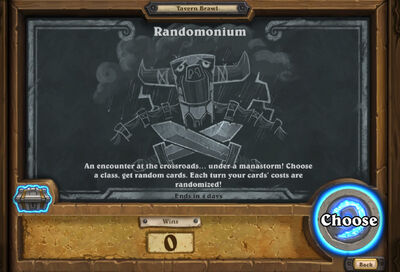 "An encounter at the crossroads... under a manastorm! Choose a class, get random cards. Each turn your cards' cost are randomized!"

Additionally, Randomonium was one of nine Tavern Brawls featured as part of the 100th Brawl, A Cavalcade of Brawls!, when its mechanics were used by the hunter class. Also it a part of the 207th Brawl, The 207th Brawl Spetacular!.

This Brawl sees players competing with randomised pre-made decks. Players can choose any class, and will then receive a deck randomly composed of neutral and class-specific cards. Decks are composed of 30 cards, but may break the usual card limitation of 2 copies per deck (1 copy per deck for legendaries), allowing any number of copies within a deck. At the start of each turn, each card (except for The Coin) has a chance to have its mana cost changed to a random value, equal to or lower than the card's original mana cost, but not lower than 1. It can also be reset to its original value.

Tempo is the best strategy in this Brawl. Play as much as you can each turn.

During the mulligan phase, high-cost cards can be more safely kept, because of the likelihood their cost will be reduced and they will become playable ahead of curve.

Cards that affect Mana cost take effect after the cost is randomized. For example, if Naga Sea Witch is in play, minions cost 5 mana, even if the manastorm has set the cost of the card to less. If Wilfred Fizzlebang is in play, cards drawn with Life Tap will cost 0 mana and not be randomized.

The "manastorm" mentioned in this Brawl's introduction appears to be an original lore concept for Hearthstone. While mana is a common element in Warcraft lore, and various technologies such as manaforges exist, manastorms have not before been documented. The term itself has been used before, most notably as the surname of Millhouse Manastorm, and two pieces of gear also use the name: Manastorm Leggings and Manastorm Band. There is a single NPC ability in World of Warcraft called Manastorm, which was added in Cataclysm, but its use is uncertain, and likely obscure.

Judging from this Brawl's rules, the effect of a manastorm appears to be to impact mana use within a localised area. Given that cards' costs are only lowered and not raised, it could be speculated to specifically facilitate magic use. Note that the game of Hearthstone itself uses 'mana' to play any card, thus involving the use of mana even in simple physical actions such as equipping weapons or armor. Within the wider Hearthstone lore, a manastorm may only impact genuine mana use, or may indeed also affect other resources such as energy or even physical capabilities.

The circumstances under which a manastorm might occur are also an interesting subject for speculation; the phenomenon may be natural or artificial, but is apparently occurring at The Crossroads, a small town in the Northern Barrens. However, the location could be an invention of the Brawl's creators, with the phenomenon itself originating in a mana-rich environment such as the Netherstorm. Indeed, the Netherstorm is known to be locked in a constant magical storm, slowly tearing the region apart.