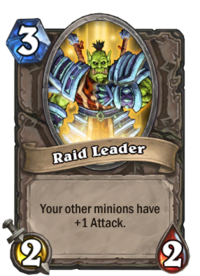 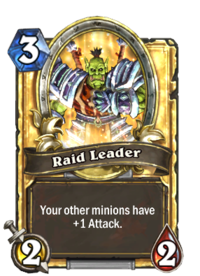 Your other minions have +1 Attack.

Raid Leader is a neutral minion card, from the Basic set.

Two copies of Raid Leader are automatically included in all players' collections upon unlocking the warrior class.

Two Golden copies of Raid Leader are a reward for raising a warrior to levels 57 and 58.

Raid Leader is uncraftable and cannot be crafted or disenchanted.

Play Raid Leader in conjunction with other minions. Raid Leader is great in decks that rely on minions with Windfury or on many small minions.

Raid Leader has good synergy with decks which focus on a large number of small minions. Examples include shaman, murloc and hunter beast decks.

With the addition of Odd Paladin, Raid Leader works very well in conjunction with the deck's constant output of small minions via its Hero Power.

The Raid Leader minion has special alternative quotes triggered exclusively during the Netherspite encounter in One Night in Karazhan.

Summon
Stand in the beam!

Attack
No, the OTHER beam!

The raid leader is there to command and guide the raid to victory with strength and intellect. Many raid leaders have come and gone during the history of Azeroth, but their legendary conquests remain.

The term 'raid leader' is widely used in World of Warcraft to describe the player in charge of a raid, a group of 10-25 players engaged in a high-end PvE challenge.

"Hearthstone: Heroes of Warcraft. Now on iPad. Handle it!" 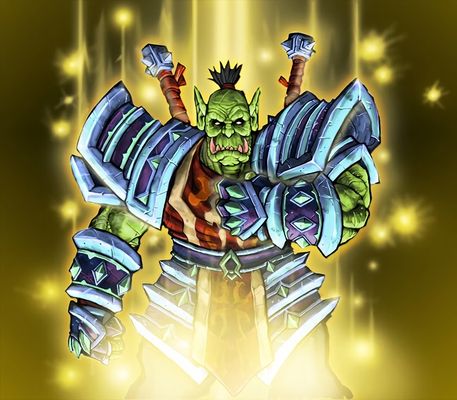