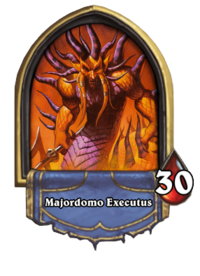 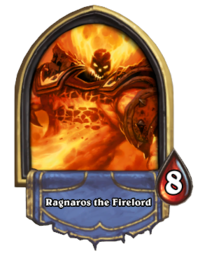 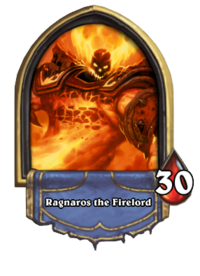 Only Majordomo Executus can summon the Firelord. Can you "convince" him to do so?

For the minion cards and replacement hero, see Ragnaros the Firelord and Majordomo Executus

Ragnaros the Firelord is a boss encounter found in the Blackrock Mountain adventure. It is the third encounter of the adventure's second wing, Molten Core.

The encounter begins with the player facing Majordomo Executus. Defeating the flamewaker causes him to summon forth Ragnaros the Firelord, and the second stage of the battle begins.

The Heroic mode hero power DIE, INSECTS! has a chance to deal 8 damage to the same target twice (for a total of 16 damage) if the target would survive the 8 damage from the first hit. 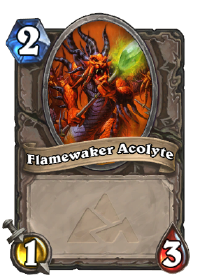 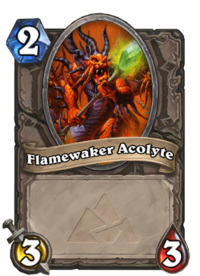 This battle's difficulty primarily lies in the bosses' deck construction. With no less than 10 copies of Molten Giant, if you try to tackle the encounter normally, you'll lose - as soon as Executus' Health dips below 21 he will begin to play Giants, as many as he can afford to that turn. Ending the turn with Executus at 11 Health or lower will therefore result in Executus filling the board with Molten Giants. Even a steady trickle of these titans can easily defeat a player, while facing 7 at once is almost impossible to survive. In addition, once Executus is defeated, he is replaced by Ragnaros - whose hero power can quickly devastate the player's board. If you can kill Executus from 21 life or more down to 0 in one shot, he won't be able to afford the Giants' 20-mana cost. In Normal mode, it should be noted that Ragnaros has a maximum Health of 8 therefore preventing him from playing Giants since he can never be missing enough Health to reduce their cost low enough to play while remaining alive.

A controlled OTK (one turn kill) strategy is all it takes to turn this fight from "impossible" to "easy". Wear Executus down to 21 life or so while controlling the board, keeping his minions and Flamewaker Acolytes down. Aside from the Molten Giants, Executus does not have a particularly strong deck -- above 20 health fully one-third of his cards are unusable. Once you have a kill combo set up, tear Executus down in one go, survive a turn of Ragnaros if necessary, then finish him off the same way. Good decks to accomplish include Druid Savage Roar swarm, Shaman Bloodlust Windfury/swarm, or Warrior buffed-up Raging Worgen.

The Heroic mode of this encounter presents a notably stiffer challenge. The main difference is the increased Health and Armor of the heroes - each having a combined 60 points to remove - and their significantly stronger hero powers: The Majordomo (Heroic) and DIE, INSECTS!, respectively.

In the first stage of the battle, Executus' improved hero power makes it harder for the player to survive. Executus will almost always attack the hero themselves, and will summon a 3/3 Flamewaker Acolyte most turns. He will also use the few spells he has to aggressively attack any high value or high Health target the player produces although his lack of destroy, silence or transform effects limits his removal capabilities. Surviving the constant onslaught of Flamewakers requires strong and repeated removal or a Taunt with at least 3 Attack with sufficient Health to survive the endless assault.

The OTK aspect of the encounter is even stronger in Heroic mode because the battle is more intense thereby making it harder to create and maintain a potential OTK board, and because Ragnaros' Heroic hero power is so strong it will quickly devastate the player's board (if not simply destroy the hero itself) once phase 2 is reached. The combined 60 points of Health and Armor possessed by Ragnaros requires a much stronger OTK ability, especially with the likelihood that the player will immediately lose some of the minions involved to his hero power.

A strong solution to this encounter is a classic Divine Spirit/Inner Fire combo priest deck. Combining Health buffs like Velen's Chosen and Power Word: Shield with Divine Shield, the player can increase a minion's Health to extreme levels, before translating that into Attack using Inner Fire. This minion will then be capable of one-shotting Executus, followed by Ragnaros. The exceptional Health also ensures protection from Ragnaros' hero power, preventing him from removing it the next turn.

The best minion for this role is Deathlord. Mogu'shan Warden is also viable, but Deathlord presents the highest Health and its relatively low cost allows the priest to put it into play early on. Taunt is key in order to force the enemy Flamewakers to destroy themselves upon the minion and not simply destroy the player in the time it takes to build the OTK device. It is therefore vital not to put the key minion into play until you have enough Health buffs to ensure its survival. Expect a Fireball and/or Lava Shock as well as attacks from everything on the board. Once you have enough cards in hand, put them all together and try to keep the minion alive until you can build it to sufficient power.

A 60/60 minion is ideal, strong enough to one-shot Ragnaros after defeating Executus. At least 30/30 is advised, due to the need to destroy Ragnaros before he has a chance to remove the OTK minion with DIE, INSECTS!. With a little luck, the priest can reach a good situation where it is possible to maintain the OTK minion while waiting for the last few cards to be drawn. Once the OTK minion is built, simply destroy both bosses.

The other key component in this strategy is healing. Lesser Heal and cards such as Circle of Healing, Light of the Naaru and Earthen Ring Farseer can be used to keep the Health of the OTK minion up, both in order to allow Divine Spirit and Inner Fire to produce the required effects, and to make sure it stays alive. Lightwell is a very strong way to counter damage to the hero until a Taunt is placed (they are usually ignored by Executus) and keep a Taunt in good Health once summoned.

The main challenge with this strategy is surviving the early rounds. Good counters such as Dark Cultist and Shadow Madness can trade 2-1 with Flamewaker Acolytes, while Mind Control Tech can be useful if all else fails. Holy Nova can also be very effective in combination with Velen's Chosen, producing enough damage to remove most enemy minions in one go. When constructing the OTK minion, Velen's Chosen is especially useful in immediately granting sufficient damage to trade with Flamewakers. Later, Kel'Thuzad can be extremely effective for allowing you to repeatedly trade smaller minions into the oncoming forces, saving the Health of your OTK minion or buying time while you search for the key cards. However, with the right draws this is unnecessary, since once built, all attackers will break themselves upon the OTK. Coldlight Oracle can be useful for accelerating construction process.

This strategy often requires several attempts to produce the right cards in time before the player is destroyed, but with a little luck can lead to a thunderous and very satisfying victory.

Previously if you killed Executus with Bane of Doom, the battle would immediately end and you would not have to also kill Ragnaros. This bug has been fixed. 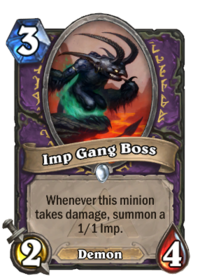 As the final boss of the Molten Core, defeating Majordomo Executus also unlocks the following reward: 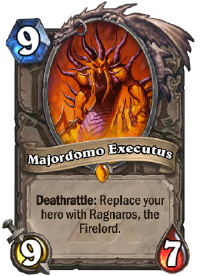 Ragnaros the Firelord
THE MOLTEN CORE IS MY DOMAIN! I WILL CRUSH YOU, INSECT!

Nefarian
Ragnaros' most trusted minion. Let's see if we can force him to summon the Firelord for us, yes?

Majordomo Executus
None may challenge the living flame!

Majordomo Executus
Hunt them down!

Majordomo Executus
Behold, Ragnaros! He who was ancient when this world was young!
Ragnaros the Firelord
MORTAL INSECTS! YOU DARE TRESPASS INTO MY DOMAIN?

Ragnaros the Firelord
WHAT IS THE MEANING OF THIS INTRUSION!

Ragnaros the Firelord
(yell)
Nefarian
Hahaha! You've done it! The mountain is mine! MINE!

The following dialogue is included in the game's data, but appears to be unused in the adventure. It is likely left over from an earlier version of the dialogue.

Death of Majordomo Executus
I submit! I submit!

An elemental lord’s most trusted lieutenant can rise to become their majordomo, responsible for taking care of their master’s affairs while they are otherwise indisposed. We’re not naming any names, but some of those majordomos are more than willing to throw their boss into the waiting arms of brave adventurers.[1]

"The runes of warding have been destroyed! Hunt down the infidels, my brethren!"

At the top of the elemental hierarchy, just beneath Ragnaros himself, resides Majordomo Executus. This flamewaker gained his exalted status by proving to be nearly invincible in the battles that raged within the elemental plane. Rumor has it that Executus supplanted Baron Geddon, and the two have been rivals ever since. Although this rumor has yet to be confirmed, there is certainly no doubt that Ragnaros does not tolerate failure. Thus, the lesser flamewakers (and, of course, Baron Geddon) eagerly await a misstep by Executus, anticipating their chance to vie for the coveted attention of the Firelord.

Executus will only be spawned after you have deactivated the runes of warding. This means you'll have to defeat every other boss (except for Ragnaros, who is summoned after Executus's defeat, and Lucifron, who actually doesn't have to be killed) in the Molten Core before you can fight him. Pre-3.0.8, you also had to douse the runes using Aqual Quintessence. You obtained the Aqual Quintessence by gaining Honored status with the Hydraxian Waterlords, and completing the quest chain ending with Hands of the Enemy.

Executus comes with four Flamewaker Healers and four Flamewaker Elite guards making this a total of a nine enemy encounter. Executus will "submit" and the fight is won when all the adds are dead. He then appears in Ragnaros' chamber and will summon the Firelord to begin the encounter. Ragnaros will then, before he engages the players, kill Executus as punishment for not being able to stop them.

In Cataclysm it is revealed that Fandral Staghelm, after becoming the leader of the Druids of the Flame, replaced Executus as Ragnaros' majordomo.