For other representations of Ragnaros, see Ragnaros the Firelord (disambiguation).

Ragnaros the Firelord is a hero that the player can pick in the Battlegrounds game mode. 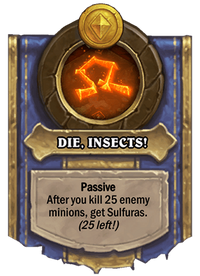 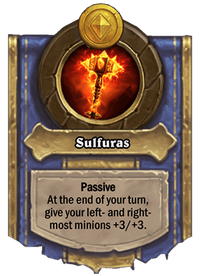 Ragnaros requires killing off a number of minions before the hero power can be activated, and it is quite powerful in increasing stats of minions. The major focus of playing as Ragnaros is to accumulate kill counts as soon as possible, thus buying high stat minions is the first priority. Upgrading tavern should come immediately after a solid team is built to keep up with the tempo.

Once hero power is active, use a variety of cleaves and other high multi hit minions mainly. You may also have a minion with poisonous or/and divine shield, place it at the rightmost position to increase the effect of right-side buffed minion. Note that the left-side minion might attack after the opponent attacks, unlike Illidan whose hero power allows minions attacking immediately.