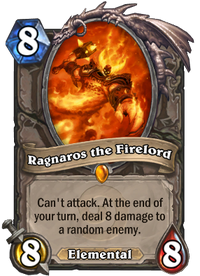 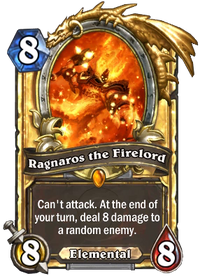 Can't attack. At the end of your turn, deal 8 damage to a random enemy.

Ragnaros was summoned by the Dark Iron dwarves, who were eventually enslaved by the Firelord. Summoning Ragnaros often doesn’t work out the way you want it to.

Ragnaros the Firelord is a legendary neutral minion card, inducted into the Hall of Fame set, formerly from the Classic set.

Ragnaros the Firelord can be obtained through crafting only.

Because Ragnaros deals 8 damage when your turn ends, he can easily work as removal, while remaining a persistent threat. Due to how he attacks, Ragnaros will not take damage, and can be used to destroy powerful minions without being destroyed himself, although the targets of his attacks are random. Silencing Ragnaros will remove his special ability, but will allow him to attack normally.

Left uncountered, Ragnaros can quickly demolish even high-health opponents, or clear several powerful threats. However, because Ragnaros' targets are randomly selected, the exact effects of summoning him tend to be hard to predict. Players who are unable to remove Ragnaros entirely can use a number of weak minions to increase the likelihood of his attack being largely wasted; removing a small minion such as a 1/1 is generally the worst possible outcome of his ability. With no enemy minions on the board, Ragnaros represents a steady 8 damage output each turn.

Ragnaros' 8 Health makes him resistant to attack and even high-damage spells like Fireball and Lava Burst, while his 8 Attack means most attackers will be destroyed. This generally makes Ragnaros a very good target for transform effects such as Polymorph and Hex, and mind control effects such as Mind Control and Sylvanas Windrunner.

Since Ragnaros's effect will always deal 8 damage, it makes him devastating when combined with effects that could summon copies of him, even with reduced stats. Cards like Shadowcaster can create 1-cost copies of Ragnaros that hit for 8 damage, while cards like Barnes and Shadow Essence can summon Ragnaros earlier than intended, who can be brought back with Resurrect or Eternal Servitude for full stats and just as much damage.

Silencing your own Ragnaros can sometimes be a good move, usually when the opponent has several minions and it is critical that the right target is struck. For example, if the opponent has 8 Health remaining but 4 minions on the board, ending the turn with an un-silenced Ragnaros grants only a 20% chance of him hitting the opponent. Provided there are no Taunts on the board, silencing Ragnaros will allow the player to use him to attack the opponent directly, winning the game.

Summon
BY FIRE BE PURGED!

Ragnaros was voiced by Matthew Mercer, who also voices Rexxar and Nefarian. Mercer is also known to fans of Blizzard's Overwatch as the voice of Jesse McCree.

Commentary: Ragnaros is heavily played in both control and mid-range decks and even shows up as a finisher in certain types of aggro decks. His high immediate value and strength at the eight mana cost made the decision during deck-building, “Is this eight mana minion better than Ragnaros?” rather than, “Is this eight mana minion the best choice for my deck type?” Dozens of cards in the seven to nine mana range never saw play because Ragnaros was always the easy choice in that range, and some decks only want to run one high cost card.