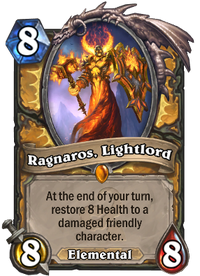 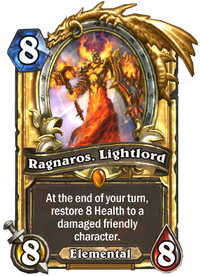 At the end of your turn, restore 8 health to a damaged friendly character.

What happens when you try and corrupt a corrupted firelord? DOUBLE NEGATIVE, INSECT!

Ragnaros, Lightlord is a legendary paladin minion card, from the Whispers of the Old Gods set.

Ragnaros, Lightlord can be obtained through Whispers of the Old Gods card packs, or through crafting.

Similar to Lightwell, this minion's effect makes it useful in conjunction with higher Health minions, or simply to restore your hero's Health. Since its effect activates at the end of the turn, it can be played with a single damaged character to get a guaranteed heal on that target for 8 or, if he is already in play and there are no other damaged friendly characters, he can attack other minions with certainty that its triggered effect will then heal it for any (non-lethal) damage suffered. The large doses of healing are best suited to healing the hero, or large minions like giants or legendary Dragons.

If the opponent is unable to remove this minion it can become an endless source of healing. Because its effect activates at the end of the turn on which it was summoned, it can be an effective and efficient card even if immediately removed, especially if the opponent has to trade multiple cards to do so. To counteract Ragnaros' healing, if possible deal a small amount of damage to other lower priority minions to make Ragnaros' targeting less reliable.

This is the "uncorrupted" version of Ragnaros the Firelord. Inspired by the awakening of the Old Gods, the evil Elemental Lord has transformed into a being of light and healing, with his end of turn effect restoring Health to friendly targets instead of reducing enemy minions to cinders.

According to Ben Brode:

"We knew we wanted to flip a lot of characters from good to evil in this expansion. We also knew that Ragnaros (once enslaved by the Old Gods) could be fun to see flip in the same way. The problem is, Ragnaros is already a terribly evil Elemental Lord. So we went the other way with it and explored what he might look like if he were “uncorrupted”. Paladins in general are the one bastion of hope in Whispers of the Old Gods, with many of their cards themed around standing against the oncoming darkness. Having Ragnaros lead the charge against his former masters seemed like it could be pretty awesome. Hence, Ragnaros, the Lightlord!"[3]

In the alternate reality into which Whispers of the Old Gods provides a glimpse, all four Old Gods are awake (and alive), and have been unleashed upon Azeroth.[4] While this has corrupted many of the world's inhabitants, others such as Ragnaros have been inspired by this cataclysm to forsake his evil ways, rising to stand and fight against the ancient horrors.[5][6]

Like many of the cards in the Whispers of the Old Gods set, this card is not intended to be canon.[7][8] 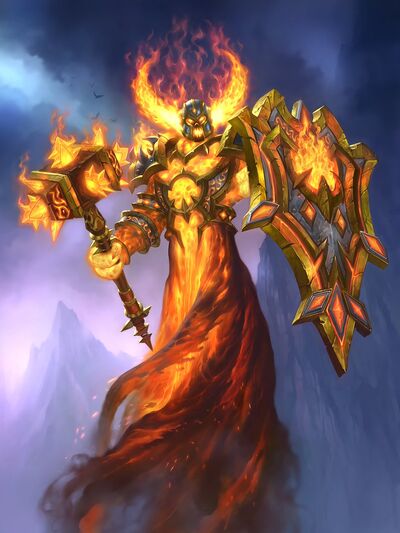