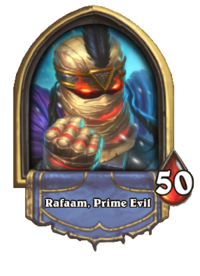 Story
A hero. A villain. And one big, big, big... BIG Dragon.
Heroic
There's no way you can win. We are doomed. 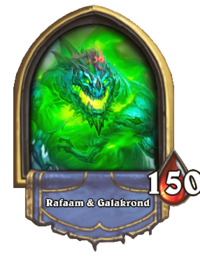 Rafaam and Galakrond is a boss encounter in Galakrond's Awakening adventure. It is the third and final encounter of Chapter 4 of Explorers campaign: Showdown in Dalaran.

The boss for this encounter is Rafaam, Prime Evil, while the hero the player controls in Story mode is The Amazing Reno (hero). 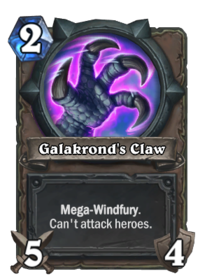 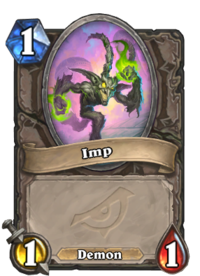 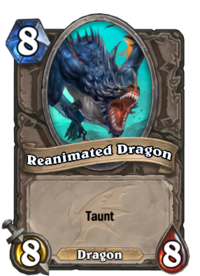 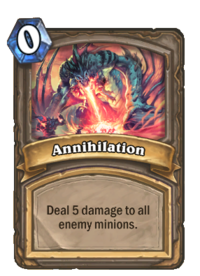 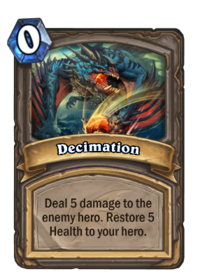 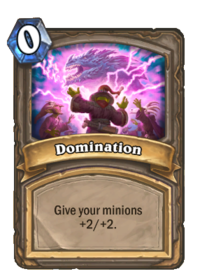 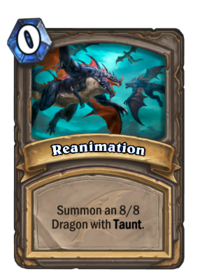 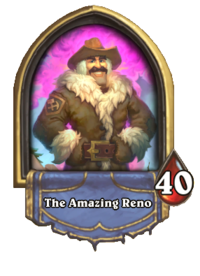 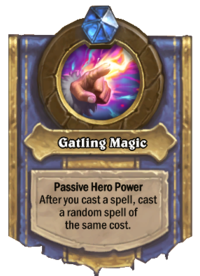 After Rafaam succesfully raises Galakrond, Draconic Potential is automatically cast for Reno. Completing this side quest turns Reno into Renogos with a new Hero Power. 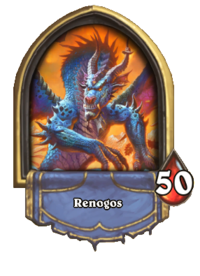 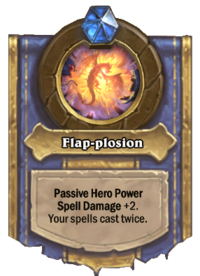 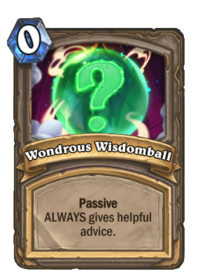 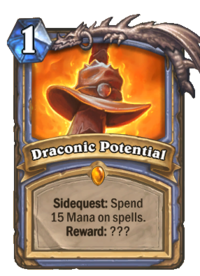 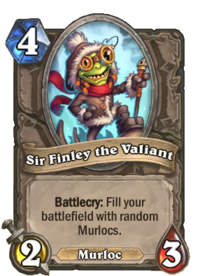 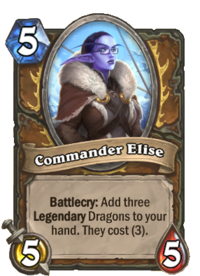 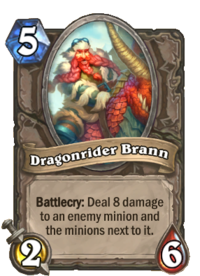 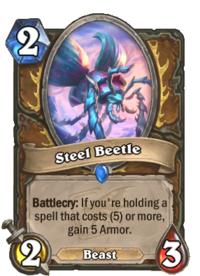 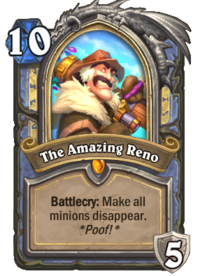 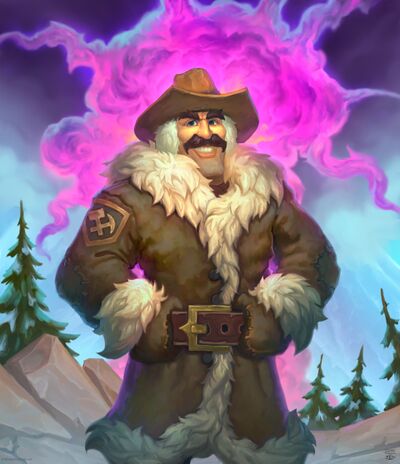 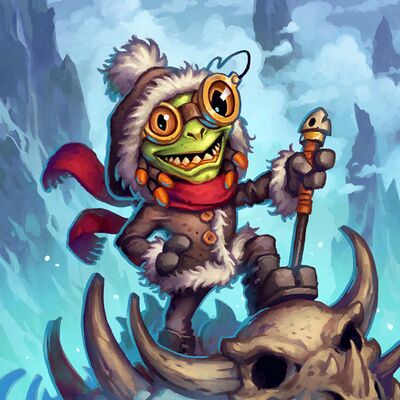 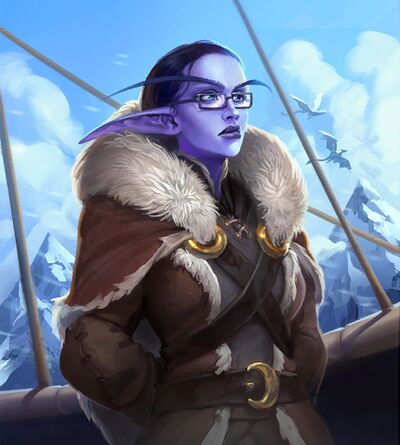 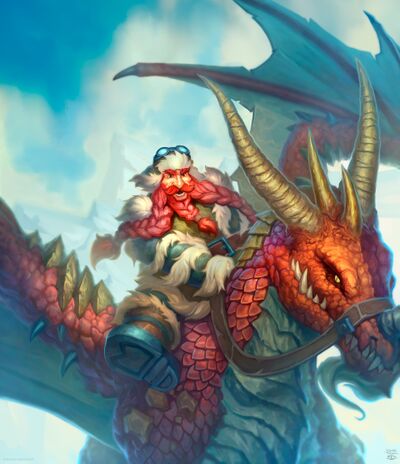 Reno
Lock down the city, everyone. I'm going after Rafaam!

Reno
You're all out of villains, Rafaam. It's just you… and me.
Rafaam
Reno Jackson! Who let you out? It is impossible to find good help.

Rafaam Invoking 5 times / Defeated before it

Rafaam
Arise, Galakrond. ARISE!!
Galakrond
My rebirth begins the cycle of the world anew.
Reno
I don't know what that means, but I don't like it.
(Draconic Potential cast)
Reno
There's so much magic here… I don't feel like myself…

(Reno transforms into Renogos)
Renogos
Wait… wha… My wings feel funny!
Rafaam
What is this? Stop with the thunder-stealing, you... mustachioed moron!

After Reno turning into Renogos

Elise
We learned about your origins at Wyrmrest Temple. Did you ever know?

Renogos
I always knew there was something different about me…

Ever since I showed up at the orphanage. Inside that egg.

Elise
In dragon years you’d be a juvenile… that explains so much.

Renogos
I suppose I always loved sitting around in piles of treasure… oh and magic tricks!

Sir Finley
The city is secured! Now then, what next?

Reno has not transformed yet

Elise
Reno, the city is safe. Let's focus on Rafaam!

Renogos with 20 health or less & being attacked

Wondrous Wisdomball
This will protect you!
(Ysera, Unleashed, Kalecgos and Dragonqueen Alexstrasza summoned with Taunt) 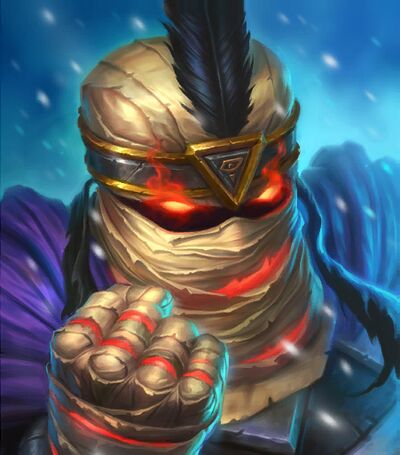 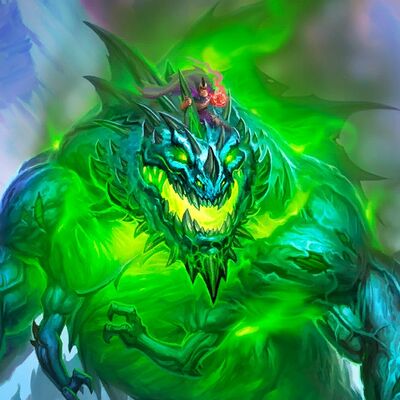 Rafaam
You are too late adventurer, Azeroth… will be mine!

Rafaam
I have put a LOT of work into this plan.

Rafaam
And the plagues! They were good fun.

Rafaam
Who would use a plague to raise a dragon? I WOULD! I AM RAFAAM!

Invoke - not the moment to raise Galakrond

Rafaam
More power!
Yes… for Galakrond!
Glorious!
He grows ever stronger…
Now we are getting somewhere!
Yes… YES!

Rafaam Invoking 5 times / Defeated before it

at the start of Rafaam's turn, one of these dialogues are randomly used. This repeats until all are used.
Rafaam
Behold, Galakrond! The greatest Dragon, from before dragons were dragons!
He will destroy you! He will smack you around with his teeny-tiny arms!
Look, he destroys foes without being told. Good boy! That is a good boy.
Sit pretty, Galakrond! Ah, he is not pretty. This is fine.
Crush them, Galakrond! I have the greatest job.

Galakrond
Annihilate.
To oblivion.
None will remain.
You are like gnats before a giant!

Rafaam
Wait no! That was MY master plan!
Behold, the second Galak- wait there were two? 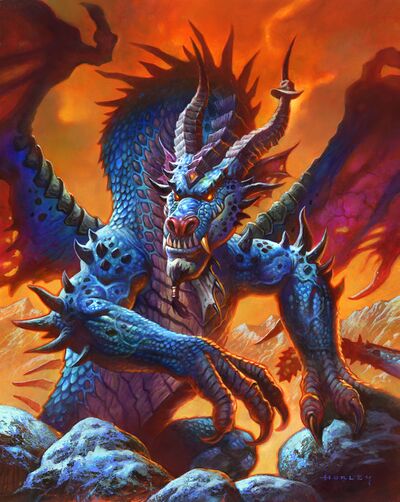 All of the emotes are the same as Reno Jackson's in Tombs of Terror adventure. 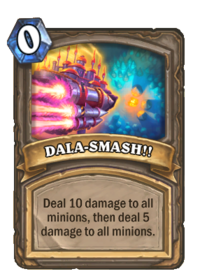 These dialogue lines exist in the game data, but never appear in the actual gameplay. Most of them also have sound files.

Reno / Renogos
Yeah, I figured that out… eventually.
So THAT'S your plan, eh?

Rafaam
My dragon will CRUSH your dragon! Yours has terrible teeth and an awful tan!
Sir Finley
A dragon! Well, that explains why he’d light his flatulence aflame!
Elise
No it doesn’t, Finley. It really doesn’t.
Brann
Reno! Er - Renogos! We've almost got 'im!

It was once planned that Rafaam would try to destroy Dalaran. In the end, this idea was scrapped. However, the card still exists, but is never used.
Rafaam
Ram the city into something! Shake them up!