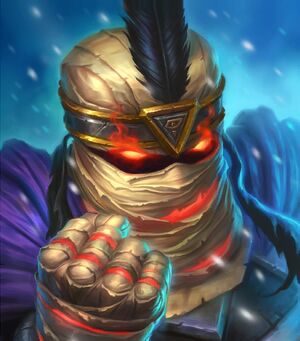 Arch-Thief Rafaam, also known as Arch-Villain Rafaam is an ethereal original to Hearthstone. Calling himself "the supreme archaeologist", the ethereal travels different worlds searching for powerful artifacts. He first encountered League of Explorers while he was trying to steal the Staff of Origination from them. After his defeat in the hands of League of Explorers, Rafaam gathered a group villains from other Hearthstone expansions and formed League of E.V.I.L. and attacked Dalaran.

Little is known about the villainous Arch-Thief Rafaam. Known as "the supreme archaeologist", he travels across worlds seeking powerful artifacts like the Lantern of Power, the Mirror of Doom, and the Timepiece of Horror.

After League of Explorers acquired the first piece of the Staff of Origination, Rafaam is revealed to be watching their progress.

After League of Explorers acquired the second piece of the Staff of Origination, Rafaam revealed that all of the events are according to his plan which is nearly complete.

When the League of Explorers recovered the third piece of the Staff of Origination and assembled it, they unwittingly triggered a curse laid upon it by the Supreme Archaeologist Arch-Thief Rafaam. The curse allowed the ethereal to break through the wards surrounding the Hall of Explorers, then he teleported into the museum, where he used magic from his many stolen artifacts to bring the exhibits to life, attacking the explorers.

Rafaam tried to use the power of the Staff of Origination for his own goals, but he was stopped by League of Explorers.

Rafaam can be seen in the trailer of One Night in Karazhan, stealing tomes from the shelves.

Rafaam is featured in a flashback, he gave King Togwaggle his lantern-crown, resulting in him declaring himself the king of kobolds. 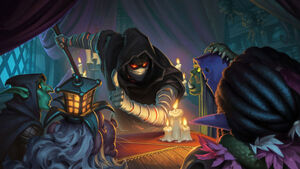 Formation of League of E.V.I.L. and Invasion of Dalaran[edit | edit source]

Rafaam explained his plan to other League of E.V.I.L. members (or rather, lets them explain it to themselves) while falling towards the city. With Dr. Boom's rockets, he planned to take Dalaran "for all that it's got", by flying the city wherever he pleased. Meanwhile, Hagatha would unleash the prisoners in the Violet Hold to distract the guards, Lazul would sow chaos in the streets to distract the citizens, and Togwaggle and his goons would rob the Dalaran bank. 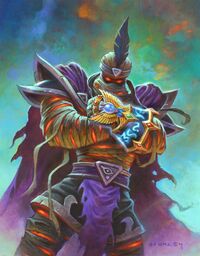 Arch-Villain Rafaam as the leader of the League of E.V.I.L.. He somehow acquired the some part of the Staff of Origination.

After the other villains had played their part in the heist, Rafaam set his sights on the Violet Citadel, where he defeated the Kirin Tor and gained total control of Dalaran.

With Dalaran in the possession of the League of E.V.I.L., Rafaam set his on sights on Uldum. Bringing the entire city of Dalaran along, he and the other members of the League attacked Uldum, releasing an army of monsters upon them.

Their actions did not go unnoticed, however, and Rafaam's nemeses, The League of Explorers, stepped up to defend Uldum from him and the League of E.V.I.L.

While the League of Explorers were able to fend off Rafaam's remaining forces, he had already managed to procure what he had come for: the Plague of Undeath.

For the final part of his master plan, Rafaam and the League of E.V.I.L. headed to the Dragonblight with the aim of resurrecting Galakrond with the Plague of Undeath and using him to rule Azeroth. He is confronted by the League of Explorers once again, and the two groups engage in a heated battle for the fate of the world.

During the heated battle in Northrend, Rafaam's forces managed to capture Reno Jackson and take him prisoner. They also raided Wyrmrest Temple and procured the remains of Galakrond.

In the EVIL campaign, Rafaam was confronted by a freed Reno in Dalaran, but the former was able to complete the ritual and resurrect Galakrond, and Reno was defeated. Rafaam went on to attack the cities of Stormwind and Orgrimmar, intent on using Galakrond to take over the world. However, Galakrond had different motives; he simply wants to destroy Azeroth. In the end, with the entirety of Azeroth in flames, no one is left to fear Rafaam. Distraught, Rafaam ends up in a battle with Galakrond and slays him, cementing himself as the most feared villain in the world, before disappearing.

In the Explorers route, Rafaam is also confronted by Reno in the middle of his ritual, and while he was successful in his efforts to raise Galakrond, Reno changed into his true form, Renogos, and stopped him. Rafaam's plans to take over Azeroth were foiled, and the world was saved.