Rachelle Davis is Senior Software Engineer on the Team 5 Hearthstone development team.[1] She is featured in the credits card of the same name. 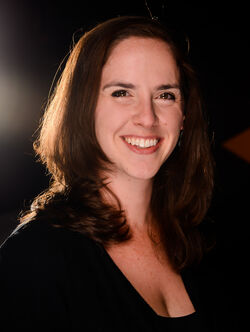 As senior software engineer on Blizzard Entertainment’s nimble Hearthstone team, Rachelle Davis architects and oversees all technical development of new game features for the blockbuster hit digital strategy card game. Rachelle has written code for every part of Hearthstone imaginable, from the client, server, and database, to networking code, tools, and more.

Rachelle’s journey as a programmer began in college at UC San Diego where she combined her passion for logic and math with her love of theatre, performing, and fantasy to pursue a career in game development. Davis joined Blizzard Entertainment in 2011 as a software engineering intern before becoming a full-time member of the team. Before joining the company, she worked on NBA 2010 and ModNation Racers at Sony Computer Entertainment America.

Rachelle is an advocate for women in software engineering and women in games. She’s also a self-professed musical theatre nerd who grew up performing and still attends shows whenever she can. She holds dual Bachelor’s degrees from the University of California, San Diego in Mathematics-Computer Science and Interdisciplinary Computing and the Arts. She also earned a Master’s of Computer Science, Game Development from the University of Southern California.[2]

The art for Davis' credits card was created by .[3]