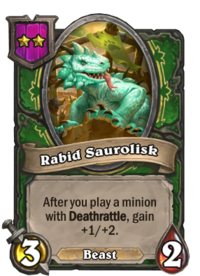 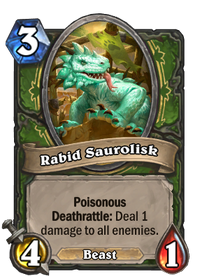 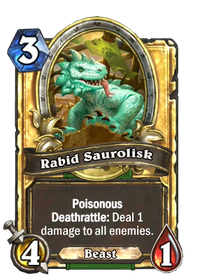 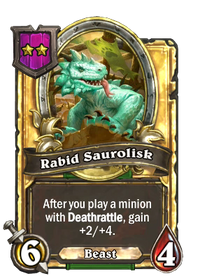 After you play a minion with Deathrattle, gain +1/+2.

Rabid Saurolisk is a Tier 2 minion in the Battlegrounds game mode.

Rabid Saurolisk is like Wrath Weaver in that it's a scaling early-game minion that can be buffed all the way into the late game. Unlike Wrath Weaver however, it doesn't require sacrificing Health, although it scales slower. Regardless, it has the potential to accumulate massive amounts of stats when kept around for long enough. Even if you don't intend to keep it, its ease of use and decent stats makes it a decent pickup to have around just for the early game if you also find a few Deathrattle minions to go with it.

The downside of playing a Saurolisk focused build is that because it's a Tier 2 minion, you'll deal very little damage to opponents if you win, which may make you fall behind to stronger late-game builds like Dragons and Murlocs.