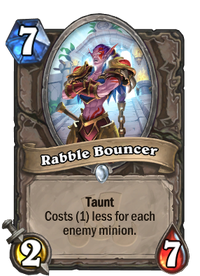 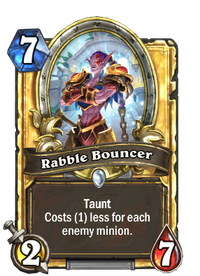 Rabble Bouncer is a common neutral minion card, from the Rastakhan's Rumble set.

Rabble Bouncer can be obtained through Rastakhan's Rumble card packs, or through crafting.

This minion functions best as a tech card against zoo decks. Its low Attack but large Health matches up excellently against many small minions. Later in the game, as the board gets contested it can still be played for a marginal cost.

As a high-cost card with built-in cost reduction, it's also a great target for Evolve-type effects like Unstable Evolution and Big Bad Voodoo.

Summon
Arena's full. Beat it.
Attack
Back of the line!

The corridor ahead of Rikkar was packed with an unusually riotous mob; a gleefully flailing mass of trolls, dwarves, ogres, gnomes, orcs, tauren, and more, including the occasional human. The wall of rampaging Rumble fans was held in check by the Arena’s bouncers' forbidding stares. Despite the festive mood, no one in the crowd was willing to test the resolve of the heavily-armored security team.[1]