"I think it’s important for there to be some kind of randomness in the game. I think it creates great stories and I don’t think you want a game that is entirely no RNG. Heck, I guess I can say a card game in its very nature is an RNG game." - Eric Dodds[1]

RNG is a term used to refer to the phenomenon of randomosity - the unpredictable outcome of a situation featuring a significantly randomised element. An acronym for "random number generator" or "random number generation", it refers to the process by which computers generate apparently random numbers, essentially the computer equivalent of 'chance'. The term is often used when referring to elements which are determined randomly, or situations which are significantly affected by chance or luck.

"You know actually I think the randomness can increase the skill required to play a game. If you imagine a game of Hearthstone except you ordered all the cards in your deck, then you could learn every game you play your 1 drop, you play your 2 drop, your 3 drop, your 4 drop, etc...but because it's random, the order you get your cards, you often see game situations that you've seen before or that no one's ever seen before. Really great players can figure out what to do in new situations better than other players. And so cards that increase randomness into the game state actually can increase the amount of skill required to solve novel game states. So I think randomness adds exciting new stories and suspense and it can make the game more skillful if you do it right." - Ben Brode[2]

Chance is an inherent part of design in many games, from Hearthstone to Snakes and Ladders. Drawing a new card from the deck, seeing how large an amount your MMORPG character crits for, or rolling a computerised dice, are all examples of RNG in action. RNG allows for some degree of unpredictability, but the exact amount of RNG implemented within a game, and which elements of the game should be subject to RNG, is a matter of great debate.

RNG can create a more exciting and memorable experience. Without any RNG, each action is 100% predictable, with a known outcome. For example, the enjoyment of simple games like Snakes and Ladders relies entirely on chance. Each player's progress around the board is a result of chance, as is the order of play. Without an element of RNG, each player would always move the same number of squares each turn, and the outcome of the game would be predictable from the outset, and identical each time you played. In Hearthstone, RNG allows you to draw a new hand each time, and adds some other elements of unpredictability through cards such as Totemic Call, Arcane Missiles and Cleave. Without RNG, players would draw exactly the same cards, in the same order, every time they played. RNG allows for a randomised, and therefore unique and unpredictable experience, every time you play.

However, too much RNG can be a bad thing. A game that hinges too heavily on luck or chance will often feel frustrating and dissatisfying - especially for the loser. Even victory may be cheapened, when it is clearly obtained by luck alone, and not by skill. Adding RNG to critical areas is also the subject of much debate. RNG is often less significant when applied in small pieces, with each instance making only a small impact on the overall outcome, such as characters in MMORPGs dealing a slightly different amount of damage each time they attack. This use of RNG rarely impacts players' experience to a large degree, and is generally preferable to an entirely uniform design. RNG in larger and more critical instances, such as in determining boss loot drops, or a special item with the power to arbitrarily grant one player a game-winning advantage, can generate a lot of excitement, but can also cause a lot of frustration. Playing a card with a lot of RNG can be frustrating if it fails, but elating if it works as intended.

Gelbin Mekkatorque is a great example of a card with a substantial element of RNG. Which invention Gelbin will summon, and which minions will be affected by those inventions, is all determined by RNG. The card has the power to turn the game to a player's advantage, but offers little guarantee that that player will be the one who summoned him. Yogg-Saron, Hope's End is another example of extreme RNG in the game. With a myriad of possible spells it could cast, the end result can leave the user in a better or worse state, but how it accomplishes it is unpredictable.

Overall, a little RNG can add a lot of fun to a game, but too much can add a lot of frustration. Some players will intentionally choose to introduce elements of RNG to reduce boredom, or simply to see what happens. However, the uncertainty of RNG elements causes many players to avoid them whenever possible, preferring guaranteed effects which can be relied upon to achieve their intended goals, and RNG options are often considered to be slightly poorer than their average effect, due to the undesirability of their randomness, which also makes planning for their use much harder. To compensate for this, RNG-heavy effects often offer superior benefits to less unpredictable alternatives, to encourage their use in-game. However, if such elements offer too large an advantage, victory may begin to feel arbitrary and unimportant, determined more by the roll of an electronic dice than by actual player skill. The exact degree and balance of RNG in games is an ongoing design consideration for developers, as well as an area where understanding of the underlying mechanics is of great significance for ensuring the satisfaction and enjoyment of the community.

RNG topping a survey of the most disliked elements of Hearthstone, late 2014

The primary form of RNG within the game is card draw. Each card that is drawn is selected randomly from the player's deck. While a skilled player can construct a deck that is likely to provide useful cards, which cards will be drawn is generally beyond the player's control. A bad streak of undesirable cards can easily ruin a player's chances of winning a game. On the other hand, a lucky streak of ideal cards can spell victory against formidable opponents.

RNG or luck is commonly perceived by inexperienced or frustrated players to be a dominant force in Hearthstone, and it cannot be denied that the draw of a single card can at times spell victory or defeat for the player. However, other players contend that Hearthstone is primarily ruled by skill and deck construction, with luck playing a notable but far from overriding role in determining the winner of matches, pointing to the consistently high success rates of certain players as evidence that the game is ruled by ability above luck. 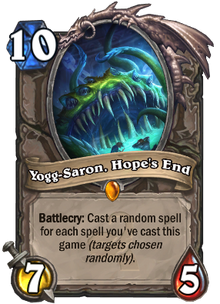 Yogg-Saron, the embodiment of RNG in Hearthstone

One common complaint is that a single instance of RNG has caused the player to lose a game. However, this is almost never accurate: when all sources are taken into account, the average match contains dozens of instances of RNG, all of which conspire - in combination with players' skill and decision-making - to produce the results seen in-game. For example, a player who is defeated by an opponent who topdecks Reno Jackson may point out that that single instance of card draw caused their opponent to win instead of lose, and thus claim that the entire game of Hearthstone comes down to nothing but RNG. However, they are forgetting the dozens of instances of card draw leading up to that moment, the initial coin flip to see who goes first, as well as all the random effects on the player's cards, which were required in combination in order to bring about the situation in which the player almost won. The selective nature of the human mind means players often remember the RNG that lost them the game while forgetting the many instances which did not, and this is especially true when RNG is the final stroke in deciding the outcome of a match. Ultimately victory is possible only through the combination of a large number of suitable outcomes - and the range of possible outcomes is itself defined by the players, through the cards they include in their decks, and the choices they make during each match. While RNG does still decide many games, the luck margin is much smaller than it often appears.

Ben Brode has spoken extensively about RNG in Hearthstone. He points out that the timing of RNG can be highly significant, stating that randomness that occurs before decision-making is "generally good for introducing more problem solving", and can increase the skill factor by requiring players to respond creatively to the new situation: experienced players will be able to adapt to the outcome of RNG, while less-skilled players may struggle. As a result RNG can increase the skill factor in a game, rather than taking away from it. Brode also points out that it takes skill and good decision-making to create the opportunities for RNG to save the player.[3]

The Hearthstone hero class most heavily influenced by RNG is the Shaman. The class's Hero Power, Totemic Call, summons a random totem out of a pool of four possible types. The RNG effect becomes less pronounced as more totems are summoned, as the power cannot summon additional copies of the same totem.

There are also many cards which feature a strong element of RNG in the form of random effects. For a full list, and tips on handling RNG in Hearthstone, see random effect.