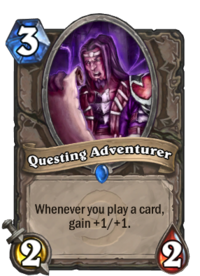 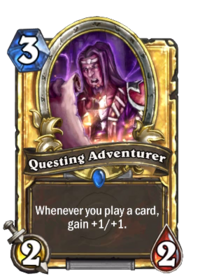 "Does anyone have some extra Boar Pelts?"

Questing Adventurer is a rare neutral minion card, from the Classic set.

A very strong card to get out early as it can build up to be a huge threat and even force multiple spells to remove it early. As a 3-drop it remains dangerous towards the lategame, and if left untouched for a few turns can get out of control.

Very strong in a rogue deck as they have a large number of very low cost cards, but generally works in any deck.

When this card is played, a smart opponent will immediately focus on Silencing or killing it as quickly as possible. If you intend it to grow into a threat, you will need protective measures such as Stealth, Divine Shield and Taunt minions.

Also synergizes exceedingly well with Defender of Argus, Shattered Sun Cleric and other cards that buff its statistics, as it benefits doubly from these cards with its text.

An early game combo can be executed with this card, with any class, provided the player has in their hand Questing Adventurer, The Coin and a 1 cost card. Play Questing Adventurer first, followed by The Coin and the 1-drop. This gives a quick 4/4 (which continues to scale), along with whatever the other card gave. This combo is very effective on turn 3. This combo can also be executed by a druid with Innervate or a rogue with Counterfeit Coin.

Summon
Give me a quest.

Questing Adventurer represents player characters in World of Warcraft. As players gain experience, such as through completing quests, their level increases, granting them increased stats. The Hearthstone Questing Adventurer reflects this with his triggered effect and quotes, as well as featuring "level up" soundbite straight from WoW. 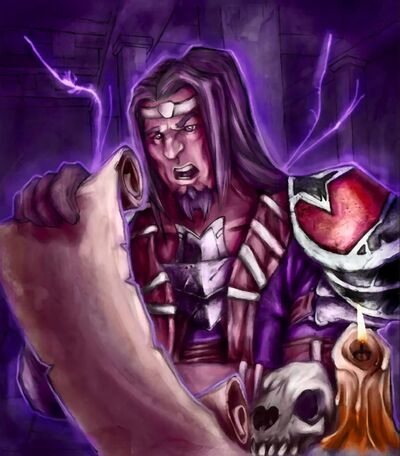