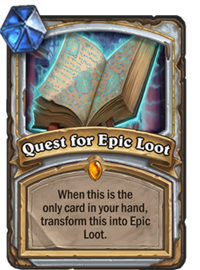 When this is the only card in your hand, transform this into Epic Loot.

Quest for Epic Loot was the first version of the priest Quest planned to appear in Journey to Un'Goro.

The card showcased an earlier design for Quests, where Blizzard intended them to feel as much like normal cards as possible to make them fit into the rules naturally while being easier to understand. However, it was noticed that Quests that transformed in the player's hand were immensely frustrating for the opponent, since from their perspective the player had just played an extremely powerful card seemingly out of nowhere. To remedy this, Quests were changed so that they had to be played and both players could see their progress, causing Quest for Epic Loot to be replaced by Awaken the Makers.[1]