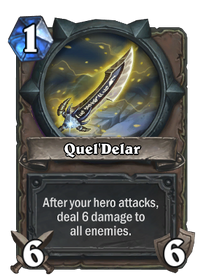 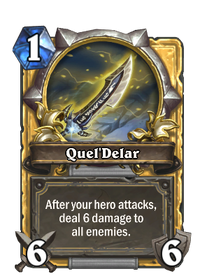 After your hero attacks, deal 6 damage to all enemies.

Quel'Delar is an uncollectible neutral weapon card, from the Kobolds and Catacombs set.

This cannot be drafted normally as part of a Dungeon Run as a treasure. If the player has both Hilt of Quel'Delar and Blade of Quel'Delar in their deck at the start of a game, they combine into this card which gets added to the player's hand immediately.

Quel'Delar, the Sister Blade is a prismatic blade forged by the night elves and the five dragonflights along with its sibling, Quel'Serrar. Quel'Delar serves as an idol of opposition against the Scourge, and the elven factions of Dalaran would therefore like to see the blade play a pivotal role in the assault on Icecrown Citadel. Players are able to embark on a mission to assemble the sword and either wield it themselves or trade it with their respective Dalaran faction for a weapon they can use.