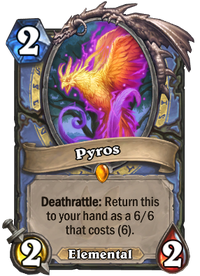 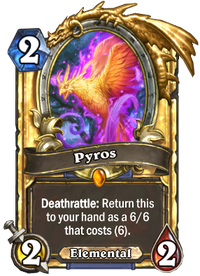 If you strike her down, she shall become more powerful than you can possibly… well, she'll become a 6/6 anyways.

Pyros is a legendary mage minion card, from the Journey to Un'Goro set.

Pyros can be obtained through Journey to Un'Goro card packs, or through crafting. 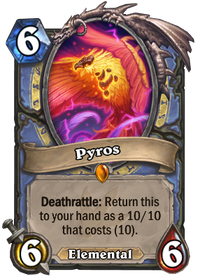 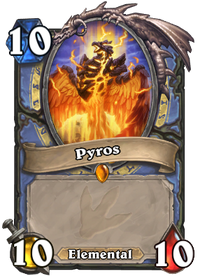 Pyros fits well into an aggressive Midrange Mage deck. It can be played for cheap early in the game, and by returning to your hand stronger with each death, you're much less likely to run low on cards to continue your aggressive push.

Being an Elemental, Pyros will trigger the effects of cards such as Tol'vir Stoneshaper and Ozruk. Due to its cheap mana cost in its early stages, it's simple enough to follow it up on the following turn with one of these cards to gain the boons from their effects.

Pyros is unique to Hearthstone.

Phoenixes are powerful creatures of fire created by mages. The phoenix is the most powerful spell a potent blood mage could cast. The idea of a creature rising from its own ashes also symbolizes the blood elves who rose from the ashes of the slaughtered high elves. Thus, the phoenix serves as an essential symbol of the blood elf race, found on their flags, banners, tabards, and racial crest.

Pyros' effect is clearly a representation of a phoenix's ability to rise from its own ashes, each time stronger than before.