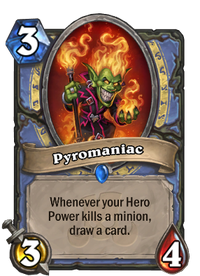 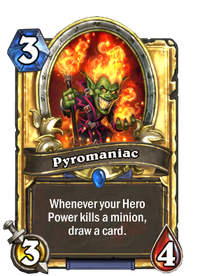 Whenever your Hero Power kills a minion, draw a card.

Pyromaniac is a rare mage minion card, from the Rastakhan's Rumble set.

Pyromaniac can be obtained through Rastakhan's Rumble card packs, or through crafting.

This card synergizes well with Mage's own Hero Power, making it possible to be a 5 mana 3/4 with 1 damage, without costing a card. Also the requirement is the same as Frost Lich Jaina's hero power, so playing Pyromaniac before using that can provide more value.

in Odd Mage this is an excellent 3-drop and its effect can be triggered easily.